MOSCOW, 16 Dec — RIA Novosti. The editors of the Russian service Bi-bi-si requires employees of any evidence of “Russian meddling” in the protests of “yellow jackets” in France. This employee bi-Bi-si has told in correspondence with one of the correspondents, which covers the action in Paris. 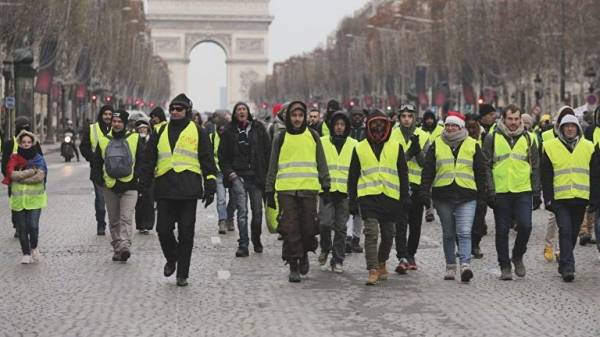 So, the journalist bi-Bi-si was trying to find out whether Moscow has any connection to the protests in the French capital. The reporter explained to her that he had not seen at meetings any Russians.

However, the employee Bi-bi-si, this response did not satisfy. “Maybe some Russian business is welded on this one for now okay?” she asked. The reporter just laughed in response.

As explained by journalist Bi-bi-si, she needs to “find corners” to prove Moscow’s intervention as a “revision requires blood.”

The protests in France

The action “yellow jackets” who was originally against the increase in gasoline prices, and then expressing dissatisfaction with the social situation in France began November 17. Mass protests accompanied by clashes of protesters with the police, pogroms and arsons of cars, destruction of shops and banks.

Last week, French foreign Minister Jean-Yves Le Drian said that the General Secretariat for defence and national security (SGDSN) conducts an investigation about the alleged involvement of Russia to the stock “yellow jackets.”

In the Kremlin such accusations are called slander and stressed that Russia believes the protests an internal affair of France, and in the Affairs of other States not interfered and does not interfere.