Scientists from Europe compared the shapes of the skulls of Neanderthals and Homo sapiens. This allowed them to figure out that Neanderthal genes might be associated with the formation of nervous tissue and structure of the nerves.

During the download an error has occurred.3D-model of the average skull of a Neanderthal (left) and the model of the “average” Homo sapiens

As the scientists write in their paper, learn how changing the structure of the human brain as evolution difficult, as modern brain nothing to compare it to. But archaeologists have already found many skulls of our ancestors and exploring their shape, you can judge about the structure of the once living in their brain.

The researchers turned to the Neanderthals, or rather, their skulls and remains of their genes that exist in some of us. Neanderthal man was not an ancestor, but rather a relative of Homo sapiens. However, these two species have coexisted and occasionally crossed, so that populations of modern man can find ancient Neanderthal genes in Europeans is approximately 1-2% of the genome. 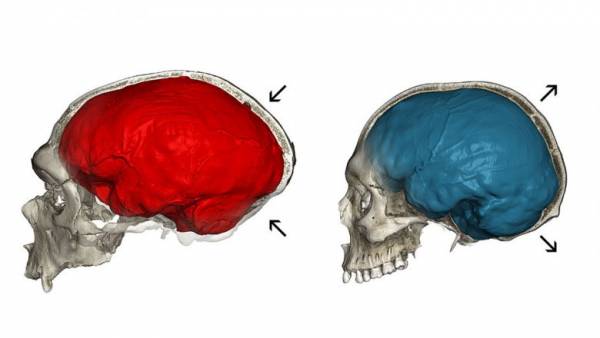 In the next stage, scientists began to compare this skull with the skulls of living of Europeans, to define, who from them the skull deviates from the norm to more “neandertalci”. All were surveyed about 4500 skulls.

According to the authors, the “wrong” form of the skull could give away the presence of his master genes of Neanderthals, and not what else, but is somehow connected with the brain. So then, scientists have studied the genes of study participants and, indeed, found that the form of skulls which is closer to the Neanderthal on that particular section of the genome — from the first to the eighteenth chromosome, there are specific genetic variants.

Scientists have disproved the myth about “bad teeth” medieval Europeans

Analysis of these sites showed that they contained sequences that are not coding proteins genes, but affect the expression of genes nearby. Among these genes were UBR4, PHLPP1. The first is the division of nerve cells and the formation of neural tissue, and studies with mice have shown that its deletion causes microcephaly — a disease in which a baby is born with an abnormally small skull and consequently the brain. A second gene, PHLPP1, needed for the formation of the myelin sheath of nerves, which is required for fast conduction of signals — neurons-without it transmit impulses to 5-10 times slower.

Scientists suggest that changes in expression of these genes and lead to small differences in the anatomical features of the brain that find expression in the form of the skull.