Putin said, who can be President

MOSCOW, 13 Dec — RIA Novosti. The President can be people of any profession, but it needs to devote to this profession my life, said the Russian leader Vladimir Putin. 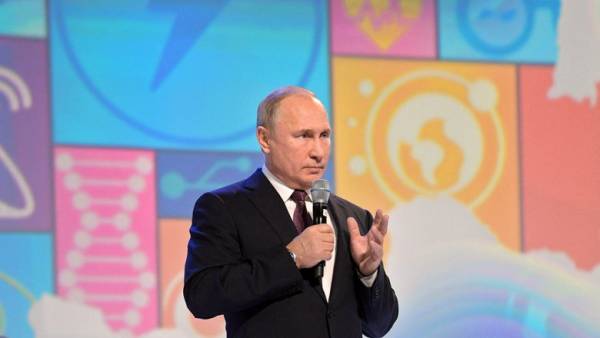 “The President can be from any profession. As a rule, heads of States, governments are people who have either legal or economic knowledge, immersed in the society and in the laws of interaction between people. These professional knowledge and skills, they are necessary and useful. But, again, in principle, people of any profession can be a head of state or government”, — said Putin on Thursday in the open lesson within the framework of the all-Russian professional forum navigation “Proektoriya” in Yaroslavl.

“I can say, is at the head of large countries, the governments of the people who have received physical education, and, in very specific areas. Such in Europe is, in large countries. There are people with other underlying initial knowledge. But that’s not it — anyway, the main thing in another. That people, when choosing such kind of activity, it must address the fundamental issue — whether he is ready or, at least, a significant part of his life to devote to the cause that he chose. Fully,” he said.

Second — of course, you know, as a doctor must rule they have is no harm. May not be the person who empathizes not all that empathetic to his patient. He must love the patient, he must dive into his problem. And try to solve his problems as your own. This fully applies to the heads of government, where top officials and heads of state, like us. Most importantly, basic.Vladimir Putin the President of Russia News

, Putin said that he had increased his self-esteem in school

He noted that, “of course, just need to be a decent person”. “But it is, however, in any profession. But it is especially important,” — said Putin.

He told them how to achieve personal success.