She confessed to the conspiracy to harm the United States. 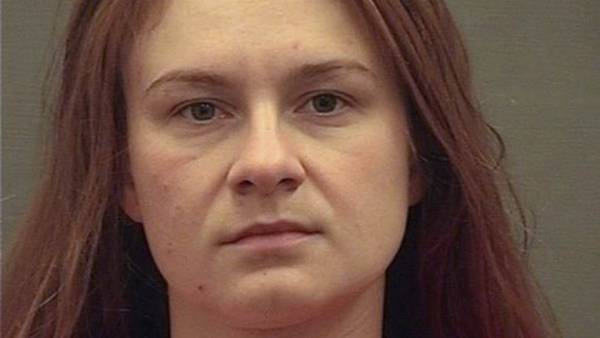 Arrested in U.S. Russian Maria Butina pleaded guilty to one of the charges at a hearing in the court of the district of Columbia. She confessed to the conspiracy to harm the United States, reports CNN.

Butina said that he acted “under the direction” of the Russian officials. His name she did not call. As CNN says, we are talking about Alexander Torshin, former Chairman of the Central Bank. According to Butini, she pleaded guilty voluntarily. For an admission of guilt, she promised to commute the sentence, confirmed in court Butina.

After the deal with the consequence of Butynol instead of 15 years in prison faces a maximum of five years imprisonment and a fine of $250 000, after the sentence is likely to be deported, reports USA Today. According to the judge, the decision on deportation will not accept the court and other agencies. The judge, having accepted the recognition of Butynol, did not set a date for the sentencing to give time for Butinai to cooperate with the investigation. The next court hearing is scheduled for February 12.

Butina was arrested in the US in July. She was charged with criminal conspiracy and working in USA as a foreign agent without notifying the attorney General. Earlier, the Russian insisted on his innocence. But 10 Dec Butina told the court about the willingness to change testimony in the case and cut a deal with Federal prosecutors.

What Butina ready to tell the investigation, were not reported. In a joint statement the parties said that Butina, her lawyer and prosecutors investigating the case, will appear in court in the coming days.The terms of the transaction Butinai with the investigation

Thursday, December 13, the TV channel CNN, citing sources, reported that Butinai cooperation with the investigation will be fairly limited. She will tell prosecutors about the US citizen, who allegedly conspired and influential Russian official, at the direction of which allegedly acted, said the source to CNN.

According to TV channel, we are talking about a political consultant Republican party of the USA Paul Erickson and former member of the Federation Council Alexander Torshin. Investigators will also try to find out from the Russians information about the Russian billionaire who for several years has funded some of its projects. Investigators must understand how Butina “fit into the overall mosaic of Russian interference in the presidential election of 2016,” says CNN.

One of the Russian billionaires in question, CNN sources said. In July, “Kommersant” wrote that the billionaire Konstantin Nikolaev (according to Forbes his fortune is $1.1 billion) was financed by the Russian projects of Butynol for three years up to 2015 we are, in particular, about the movement “Right to arms”, which is headed by Butina. Thus from 2015, the businessman had Butinai any financial or other support, said the representative of the Nikolaev edition.

Russiagate13, декабряCNN: Butina agreed to cooperate with American следователями13 disabledplanet demanded better conditions of detention in Butinai тюрьме11 decapeptyl for the first time commented on the accusations Butinai links with the secret servicesAs Torshin may be associated with the case Butinai

According to CNN, Butina in the United States ran errands Torshin, who 2001-2015 was a member of the Federation Council, and since January 2015 he worked in the Central Bank.

In late November, the Central Bank announced his departure from the post of Deputy Chairman in connection with retirement. Against Torshin from April 2018, are the US sanctions.

Since the arrest of Butynol Torshin has never commented on the information about possible involvement with her. A source close to the Central Bank, told the BBC Russian service that the Chairman of the Central Bank after charges she went on vacation and didn’t show up for work all summer and autumn, and after his leave, took sick. For the management of the Central Bank “hobby” Torshin was an unpleasant surprise, in the US, he traveled during the holidays, the Central Bank never sent him to the United States, the source said of the air force. “Participation in the prayer Breakfast at all found out after the fact, he did not warn anyone. Central Bank eschews politics, and his activity outside the Bank was unpleasantly surprised by his leadership,” the source added of the air force.

In February 2017 TASS reported that Butina was part of the Russian delegation attending the National prayer Breakfast celebration with the participation of the President of the United States Donald trump. The formation of the composition of the delegation, then engaged Torshin, told Butina Agency.

According to Reuters, with Erickson Butino linked “personal relationship.” In the court documents that were previously quoted by the Agency, it was argued that in the United States Butina and Ericsson together has rented an apartment. The Russian woman considered the relationship with Ericsson as a “necessary aspect of its activities”, stated in the documents: it is expected that the American will help her to do the work in the interests of Russia. In 2016 Butina and Erickson, South Dakota opened the company Bridges LLC., registering it to the home address of American. What is involved in the company and the purposes for which it was created in the court documents was not specified.