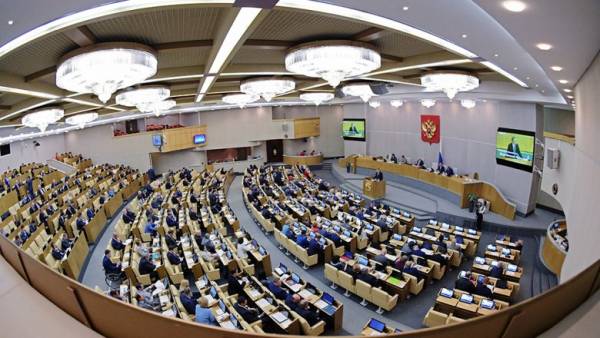 Wednesday marks 25 years since the adoption of the Constitution of the Russian Federation. On the same day, your anniversary and the Russian Parliament — the 12 December 1993 elections to the first convocation of both houses.

“Today we have made 8 thousand laws, it is the work of the deputies of the seven convocations to date, of which 7963 entered into force, 7 approved by the Federation Council, directed to the President of the Russian Federation, 20 is located in the Federation Council. In the State Duma there is no part of laws enacted in the first convocation. The transcript of the last meeting established that there were 460. Electronic system the “Law” was absent,” said Volodin during a plenary session on Thursday.

Eight law initiative, which is designed to implement the instructions of the President of the Russian Federation.

The new rule introduces the obligation of law enforcement to inform on results of consideration and taken decisions on the transmitted control and audit body of a constituent entity of the Russian Federation materials. The same rule applies at the Federal level.

In addition, the law proposes to extend to all subjects of Russia regulations, now in effect in respect of cities of Federal significance. The position requires that the representative bodies of municipalities may conclude agreements with the Supervisory and audit bodies of subjects of the Russian Federation on the transfer of authority for the implementation of the external municipal financial control.