Prosecutors of Moscow do not stay for long

Vladimir, looking for a replacement. 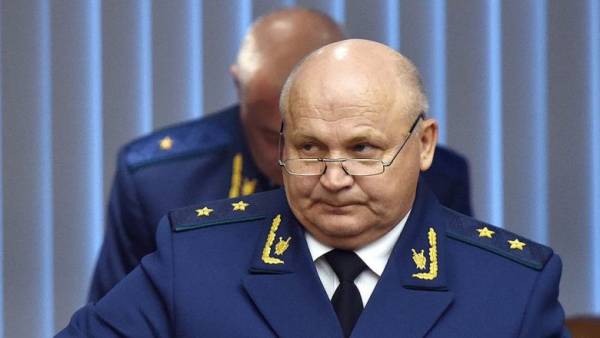 As it became known “Kommersant”, Vladimir Churikov, head of office of public Prosecutor of Moscow in the autumn of 2015, will soon leave his post. To perform the duties of the head of the Supervisory authority of the capital will be his first Deputy Oleg Monakov. However, who will eventually become a city Prosecutor, is not clear.

An informed source told “Kommersant” that Vladimir Churikov now is in holiday, after which move on to another job, not related to Supervisory activities. Mr. Churikov, working in the Prosecutor’s office since 1983 when he graduated from the Krasnoyarsk state University, has long years of service, but before retirement is far from it.

According to the law on Prosecutor’s office, the age limit of stay on service for its employees, appointed by the decree of the President or in his view, is seventy years, while Mr. She barely sixty.

Prosecutor of Moscow mister Churikov, for five years headed the office of public Prosecutor of the Volgograd region, was appointed by presidential decree in September 2015. In the capital city of Volgograd, he came without his team have not received the full support in the capital and remember nothing special.

According to the interlocutor of “Kommersant”, the resignation of the state adviser of justice 2-go a class Churikova at his own request is scheduled before the Christmas holidays.

His successors tipped Oleg monakova, which, by the way, as the acting Prosecutor of Moscow, is a native of the Krasnoyarsk territory. However, unlike mister Churikova, his first Deputy has vast experience in the capital region. In 2004-2007 he was a senior investigator, investigator for particularly important cases of the Department on investigation of murders and banditry of the Prosecutor of the Moscow region. Then Mr. Manakov three years was the head of the investigative Department of the Investigative Committee of Russia in the Moscow suburb of Odintsovo. In 2010-2012, he was Deputy Prosecutor of the 3rd Prosecutor’s office on supervision of execution of laws on especially regime objects of the Moscow region. Year headed the office of public Prosecutor Krasnogorsk, until it moved from it in 2012 to the Prosecutor of the capital. In March last year, Prosecutor General Yury Chaika has appointed Mr. monakova first Deputy Prosecutor of Moscow. However, the interlocutor “” could not clarify whether Mr. monakova improving or not. With the city attorney, he said, will be determined by the end of January — beginning of February.

It should be noted that the last time prosecutors in Moscow did not stay long. The predecessor of mister Churikova Yuri Kudeneyev, who led gorprokuratury four years, left his post in the fall of 2015. According to the official version, the reason for the dismissal was the resignation at own will.

However, the departure of Mr. Kudreeva was preceded by a loud corruption scandal and audit by the state office of public Prosecutor of the Metropolitan Prosecutor.

Corruption then is not found, but was still revealed evidence of improper contact of the head of the Moscow Prosecutor’s office, which found inconsistent with the code of ethics of the employee of the Supervisory authority. As told “Kommersant”, a few months before, in Moscow, FSB operatives detained in one of cafe of the former official’s service for veterinary and phytosanitary surveillance, which withdrew €500 thousand this money he, according to some, being a mediator was going to give to employees of the Moscow Prosecutor’s office for assistance in mitigation of sentence in the appellate court earlier convicted for embezzlement of RUB 0.5 bln banker. In the framework of negotiations supposedly Metropolitan Prosecutor met with the facilitator at the restaurant in an informal setting. However, the outcome is not affected, the money, the prosecutors were not transferred, and the mediator was charged with fraud (part 4 of article 159 of the criminal code) for attempting to take over other people’s money.

In the Prosecutor’s office upcoming personnel changes do not comment.