The boy with the jaguars. The story of Thiago, who is able to live with predators

This photo was reposted on the world wide web: a boy swims in the company of two jaguars. One of them, it seems, even hugging a child, posing for the camera. 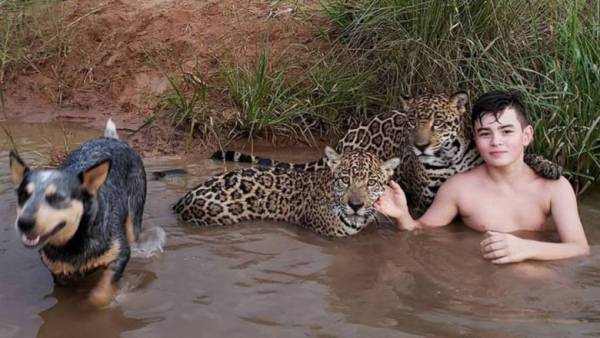 Popular the has inevitably raised questions about its authenticity. It turned out, that photo is not fake. Moreover, for the hero of this photo captures her scene — quite a mundane case.

In pictures — 12-year-old Brazilian Thiago Silveira. He lives and plays with the jaguars from infancy.

“I have friends who say that this photo is fake, but many like it. They, too, would like to play with the jaguars. It’s great that I can share my experience with people in life is not as fortunate as me”, — told the journalists of Bi-bi-si Thiago Silveira.

Childhood in the company of big cats

The boy’s parents, Leandro Silveira and Anah Jacomo biologists, coordinators of the Brazilian Institute of jaguars (IOP) in the Brazilian state of Goias. The objective is to study and preserve the largest cat of America.

“My son after birth, grew up surrounded by jaguars and from infancy have learned to coexist with predators. We, of course, imposed some restrictions, but he already knows how to behave with them, explains Leandro Silveira, who published a famous picture. It is completely natural. It’s part of his daily life, nothing special.”

When Thiago was born, his family has grown to three cubs Jaguar. For a walk with her parents Thiago went in the company of small predators. Fed all four of the bottles at the same time.

The boy always felt that he is special: few who had a chance to grow with big cats.

“In our family all love and respect each other, I always liked to help parents to care for the animals,” he says.

Silveira since childhood, instilled in his son the idea that sounds in all his lectures about the jaguars: “These animals do not perceive the person as a potential victim. They react to our actions, so it is important to show respect for them. Their actions clearly demonstrate, when you do not want that you were near.”

Border dozvolennogo to be aware of the boundaries. When Jaguar wants to communicate, he comes. It’s not social animals, but they know how to create lasting relationships.Ana To Gammamat Thiago

According to her, between her son and the jaguars never happened no conflicts. At the same time, Ana stresses that never leaves the child alone with the predators.

“We are always very careful in handling the jaguars and all other animals. Our safety rules are very clear,” she says.

The jaguars of Silvery and Giacomo live on 123 acres (approximately 50 hectares) owned by the biologists of the territory. Unauthorized access to this area is prohibited so as not to startle predators.

Parents Thiago created the institution of Jaguar in 2002 and initially wanted to study this kind of cat, but then when they asked for help, the representatives of the Brazilian Institute of environment and renewable energy, decided to create a shelter for the young jaguars.