In the centre of Strasbourg the shooting occurred, two people were killed

In the centre of the French city of Strasbourg, the residence of the European Parliament, the shooting occurred. Unknown persons opened fire on a crowd in the streets of Grand Arcades. Killing at least two people, 11 were injured, including a policeman. Later, there were unconfirmed reports of three or four dead. 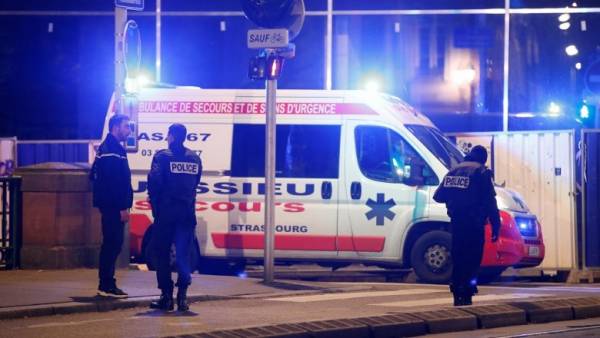 According to Actu17 a police operation in the area of Neudorf on the street Epinal where barricaded the wounded shooter. It’s a small street with private houses.

As reported by the Prefecture, the attacker has already been identified. The shooter was listed in the register of persons representing a threat to the French state security, the so-called “S”.

The city centre, which now houses the Christmas market, surrounded. The person who opened the fire, has not been found yet. But, according to the Prefecture, it has already been identified. Police evacuated the centre of the city near the Grand Rue, and asks passersby to take refuge in shops and restaurants and not to go outside. The authorities do not exclude a terrorist act.

Emergency Protocol activated in the hospitals of Strasbourg, according to Franceinfo. “White plan is an emergency plan to assist in case of an attack, epidemics or natural disasters,” — says the publication.

According to BFM, the President of France Emmanuel Makron inform about the shooting. He was sent to Strasbourg, the interior Minister Christoph Costanera.

#BreakingNews 1 dead and 6 injured after shooting in center of French city of #Strasbourg, French police say; area remains on lockdown as the situation develops. #strasbourgshooting pic.twitter.com/uvh0yPV5AX

Mr. Castaner before departure to Strasbourg confirmed to reporters that the two killed, eleven wounded, and identified the offender was known to the police.

Consulate of Russia in Strasbourg has no information about citizens of Russia, who could suffer as a result of the attack. “We are monitoring the situation,” — said “RIA Novosti” member of a diplomatic mission.