He denied accusations of interference by Moscow in Moldova elections

The President of the Republic of Moldova (RM) Igor Dodon commented on the statement by the Prime Minister Pavel Filip of Moscow’s attempts to influence parliamentary elections in the country in February 2019. He told “Izvestiya” that Russia’s actions — a gesture of goodwill, based on an agreement between him and Russian President Vladimir Putin. 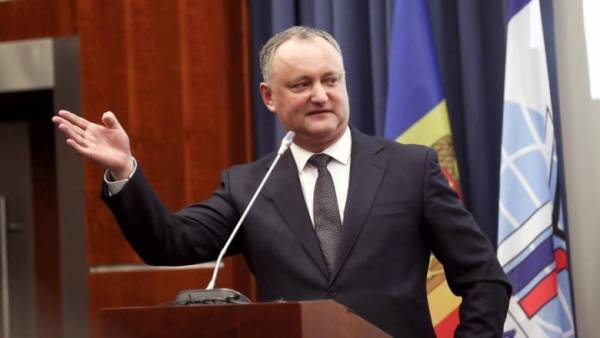 During the October visit of the Moldavian leader to Moscow the parties agreed that from 1 January to 23 February 2019 the citizens of the Republic who have violated immigration laws of Russia, will be able to return home, so will be able to participate in parliamentary elections. However, the Prime Minister has regarded it as attempt of Moscow’s interference in the internal Affairs of Moldova.

Dodon noted that Moscow has just refused to punish people who came to Russia to work and violated the permissible period of stay in the country.

The leader of Moldova added that the government of the Republic does not create normal conditions for participation in elections of citizens working in the Russian territory.

Deputy Chairman of the Duma Committee on CIS Affairs, Eurasian integration and relations with compatriots Victor Vodolatsky has noticed that at present “Russian threat,” the countries that are dependent on the US.

Elections in the Moldavian Parliament is scheduled for February 24, 2019. According to recent polls, the opposition Party of the socialists, supported by the President of the country, leads in the upcoming vote.