What the Prime Minister sees the development of Russia in the next historical stage. 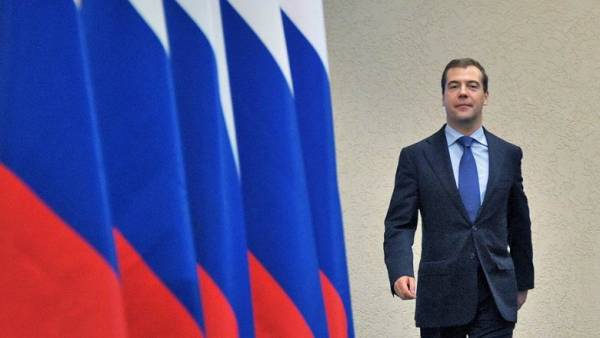 The Constitution needs to rule by only a point, if it is necessary for “updating the status of the authorities, the development of certain rights,” says Prime Minister Dmitry Medvedev in an article for the magazine “Law”. It is published for the 25th anniversary of the Basic law. Mr Medvedev predicts “strengthening the judiciary”, as only she can be the driver of changes that “will advance to the embodiment of the ideals of a democratic state”.

In the article, which was published in the journal “Law” for the 25th anniversary of the Constitution, Dmitry Medvedev expects that Russia expects “era ships”. He invoked article 18 of the Basic law, which “directly stipulates that the rights and freedoms of man and citizen determine the meaning, content and application of laws, activity of legislative and Executive authorities, local self-government and guaranteed by law”. Mr. Medvedev notes that “the system of government bodies at Federal, regional and municipal levels, the competence of which is clearly delineated by law”, and according to the Constitution “that the government will ensure the realization of the rights and freedoms of man”. Now, according to the Prime Minister, to “make the entire state apparatus worked not as a thing in itself, but was aimed at the implementation of the principles of a modern democratic state”.

“The next stage should be a transition from a focus on state-building to development of human freedom, to promote his initiatives,” — said Dmitry Medvedev.News

Who invented the Constitution: interesting facts about the document

He argues that “strengthening the judiciary” would be the shortest way to such a result, because it is, “as a rule, simultaneously entails the development of human rights”. “That the judiciary will inevitably become a “driver” of reforms that will advance to the embodiment of the ideals of a democratic state,” he said.

The measures required for strengthening the judiciary, the Prime Minister does not call, but noted that, in the promotion of “the ideals of a democratic state” contraindicated “decisive changes to the text” of the Constitution and especially the adoption of the new. “The Constitution should in principle be eternal,” and only valid “point” adjustment “aimed at the actualization of the status of the authorities, the development of these rights”, says Dmitry Medvedev, Recalling the experience changes the Constitution during his presidency. He took recall to increase the term of office of the President (from four to six years) and deputies of the state Duma (from four to five years).

More than 40% of Russians have never read the Constitution

“The 1993 Constitution was held as the “Constitution state”,” said “b” managing partner of consulting Agency “Rumyantsev and partners” Oleg Rumyantsev, who, in 1990-1993, he was the responsible Secretary of the Constitutional Commission of the Supreme Council of the Russian Federation, who developed one of the projects of the Basic law. “But now we are in a new era, and a strategic goal to make her the “Constitution of society”” — said Mr. Rumyantsev, without specifying which state agencies or social forces capable of solving this task. “Strengthening the judiciary” will require real independence of judges, which is now largely conditional, told “Kommersant” the constitutional judge Tamara Morshchakova. In her words, “in the independent judges in the interest of all citizens because it is the only way to protect their rights.” But the authorities are interested in an independent court, “only when the turnover of power” and needs the protection of an independent judiciary. Director of the Institute of monitoring the effectiveness of enforcement Elena Lukyanova doubt that built up over 25 years of power system corresponds to the principles of a democratic state enshrined in the Constitution, but are impressed by her intention Dmitry Medvedev, “strengthen the judiciary”. “But this will require a radical judicial reform, without which the protection of human rights impossible, — she said.— The judicial system should be changed, it is vicious in nature and is not suitable staffing”.