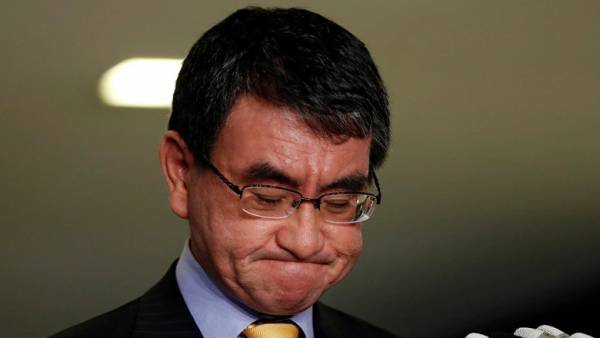 The record of his communication with the press is on the website of the Japanese foreign Ministry.

In particular, the Minister was asked to comment on the statement of his Russian counterpart, Sergei Lavrov, said that the recognition by Japan of the outcome of the Second world war it is necessary to continue negotiations on a peace Treaty with Russia.

Kono four times asked journalists “to move on to another question.” As a result, one of them said that such answers do not correspond to the format of the press conference.News

The Minister said that “wants to thoroughly prepare the atmosphere for talks” with Russia. Also Kono reminded that unlike him, representatives of the Russian government regularly comment on the topic of Russian-Japanese relations.

At a meeting in Singapore on 14 November, Russian President Vladimir Putin and Prime Minister Shinzo Abe agreed to intensify Russian-Japanese talks on peace Treaty based on the Joint Declaration of 19 October 1956. It was terminated the state of war between the two countries restored diplomatic and consular relations. In the ninth article of the Declaration, the Soviet government agreed to transfer to Japan of Shikotan island and several small uninhabited Islands of the lesser Kuril ridge with the condition that their actual transfer under the control of Tokyo will be made after the conclusion of a peace Treaty. The Declaration was ratified by the parliaments of both States on 8 December 1956.