The main task of a six-hour spacewalk is the inspection “hole” in the living compartment of the ship “Soyuz MS-09”. 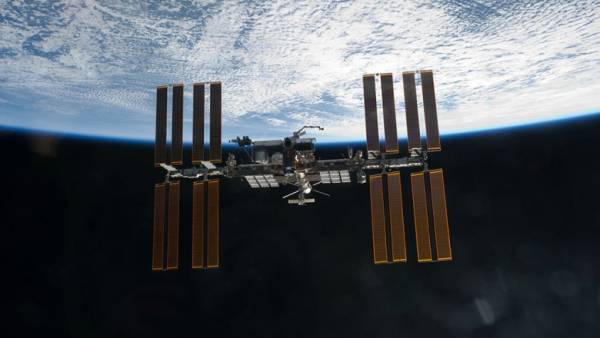 MOSCOW, December 11. /TASS/. Russian cosmonauts Oleg Kononenko and Sergey Prokopyev on the crew of the International space station (ISS) on Tuesday will make a spacewalk, said in Roskosmos. The main task of the six-hour exit — opening meteoroid bumper “Union MS-09” and inspection “holes” in his living compartment from the outside.

The program provides a six-hour stay of astronauts in outer space to conduct works on the outer surface of the station. The estimated start time of the spacewalk — 19:03 MSK, advanced completion time out — 01:34 MSK 12 Dec.Roscosmos

As told TASS source in the space industry, the main task — “inspection holes on the external surface of the orbital module of the spacecraft “Soyuz MS-09″ with the opening of the insulation panels and meteoroid bumper in the area specified by the crew of space leaks”. Operation on opening of the hull in space will be held for the first time in the history of space exploration, he added.

After that, Kononenko and Prokopiev will visit and photograph the hole in the living compartment. Also they will take scrapings from the surface of the hole, which is sent to the Ground on 20 December on the same ship “Soyuz MS-09” — for further study by specialists.

For inspection holes in the living compartment of the “Union MS-09” Kononenko will be strapped to a freight manipulator “Arrow” (crane to move cargo and astronauts for the ISS exterior), previously reported the cosmonaut himself. He said that work in outer space will be carried out by mounting on the boom of the Russian production. “Arrow” is a telescopic design and can extend over 15 metres, allowing it to move loads along the entire length of the Russian segment of the station.

If the astronauts have time, they can perform on Board the ISS two more research tasks. Kononenko and Prokopiev have to dismantle the equipment of the experiment, “Endurance”, which studied the effect of space flight conditions on certain materials. The second task is to remove from the module “Search” the device, which was placed on the external surface of the ISS for research in terms of the hard cosmic radiation.

Kononenko arrived at the ISS on December 3, Prokopiev working at the station since June of this year.

Earlier this spacewalk was planned for 15 November this year, and he had to perform Prokopiev and Roscosmos cosmonaut Alexei Ovchinin, but because of the accident of the carrier rocket “Soyuz-FG” October 11 Ovchinin arrived on the ISS. The spacewalk was rescheduled for December 11.

The hole in the “Union”News

August 30, ISS there was a drop in pressure. It was later determined that this occurred because of a leak in the docked to station “the Union”: the air went through the hole with a diameter of 3-4 mm frame household vehicle compartment. A few days later the teams on the Ground came to the conclusion that the hull was drilled from the inside.

Executive Director of the Russian space Agency for manned programs Sergey Krikalev reported earlier that the Corporation sees as one of the versions of the appearance of holes in the “Union MS-09” damage one of the crew members of the ISS. The likelihood of damage to the “Union” in space he estimated as 50 to 50. There is a version on the damaged ship on Earth. In both cases excludes both intentional and accidental actions.