The EU imposed sanctions because of the elections in the Donbass

The European Union added to the sanctions list of nine people because of the elections in the breakaway republics of Donbass — the Donetsk people’s Republic (DNR) and Luhansk national Republic (LNR). 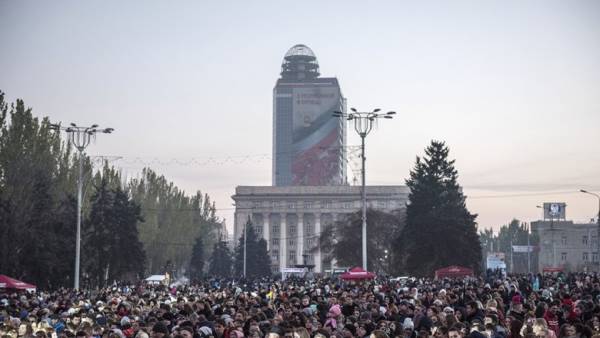 The list is published in the official journal of the European Union. In it, in particular, appears Leonid beekeeper who is on the voting results became the leader of the LC.

In addition to beekeeper on the list — Mr Bedika and Denis Miroshnichenko, chairmen of the legislative authorities of the DNI and LC, in which elections were held. Also under the restrictive measures were the chairmen of Central election commissions of the republics and Olga Pozdnyakova Elena Kravchenko. The sanctions involve travel restrictions and asset freezes in the EU.

On 5 December, the sanctions were approved at the level of permanent representatives of the EU, what he wrote in the Twitter the correspondent of “Radio Liberty” in Brussels Ricard Jozwiak. On Monday, he wrote that the sanctions approved by the foreign Ministers of the European Union, Reuters later confirmed this. The names of new defendants in the list still had not called.

According to Reuters, the foreign Ministers of the EU made clear that the restrictive measures relating to the conflict of Russia and Ukraine in the Kerch Strait will not be accepted. The head of EU diplomacy Federica Mogherini said that the foreign Ministers of the EU discussed with his Ukrainian colleague Paul Klimkin “recent developments in the Azov sea, but also — and mainly — to support Ukraine, Ukrainian people and the territorial integrity of the country.”

Elections of leaders and members of the legislative bodies in the breakaway republics of Donbass passed on November 11. They ended with the victory of the current leadership: in DPR Denis Pushilin and the Pro-government movement “Donetsk Republic”, in the LC — Leonid beekeeper and his movement “World region”. The turnout was about 80% in DND and 77% in the LC.

The leaders of Germany and France Angela Merkel and Emmanuel macron, and Ukrainian President Petro Poroshenko called these elections illegal. The Kremlin said that Russia “with understanding” refers to those elections and that their conduct will not affect the implementation of the Minsk agreements.