President Vladimir Putin has supported the transfer of the capital of the far Eastern Federal district (FEFD) from Khabarovsk to Vladivostok, according to “RIA Novosti” with reference to press Secretary of the head of state, Dmitry Peskov. 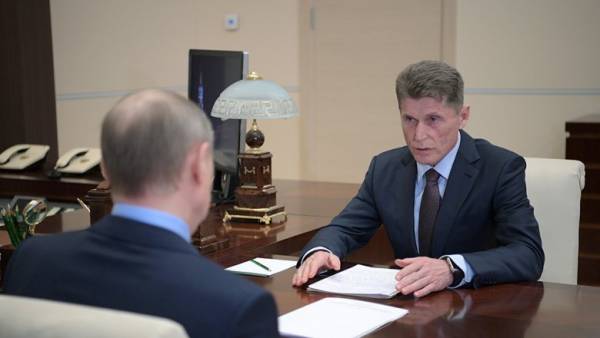 This proposal appealed to the President of acting Governor of Primorsky Krai Oleg Kozhemyako, reported RBC and Kommersant. Kozhemyako emphasized that for “all its history Vladivostok was the center of the Far East”, and Primorsky Krai is the leader of economic development of the region. The region accounts for 20% of GRP and 30% of the population of the County, he pointed out. According to Kozhemyako, the transfer of the capital of the far Eastern Federal district in Vladivostok “will give consistency to the outbreak in the province’s economic and social transformation”, as well as contribute to the implementation of major investment and infrastructure projects.

The Kremlin sees many factors in favor of moving the capital of the far Eastern Federal district, said in October, Putin’s press Secretary Dmitry Peskov. At the same time, he noted that previously had to be formulated a clear position in the region.

Kozhemyako December 16, will participate in elections of the Governor of Primorye. He was appointed Putin acting head of the region after the collapse of the second round of the gubernatorial election and leaving office the former head of the region Andrey Tarasenko.

Earlier Kozhemyako said that his initiative to move the capital of DFO supported Prime Minister Dmitry Medvedev and the head of the presidential administration Anton Vaino reacted to the idea of “generally positive.” Deputy Prime Minister and presidential Plenipotentiary envoy to the far East Yury Trutnev has instructed the Ministry and the staff of the Embassy until December 1 to prepare for Putin’s report on the benefits of moving the capital of DFO.