In addition to the block wins parliamentary elections in Armenia

Block the acting Prime Minister, opposition leader Nikol Pashinian, the “step” confidently wins early parliamentary elections held in the country on Sunday 9 December. After counting of the ballots, with 50% of the sites block in addition to gaining more than 70% of the vote, said Monday night the Central election Commission of the Republic. 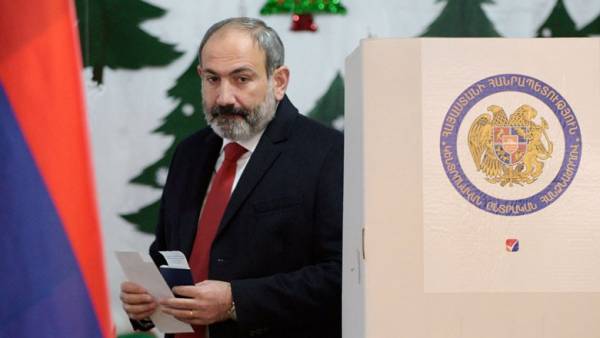 “Block “My step” is gaining 70,16% of the vote. Running the second batch of “prosperous Armenia” — to 8.34%,” — said in a statement on the CEC website. By intermediate results, the five percent barrier in the parliamentary elections the party also overcomes the Pro-Western orientation of Armenia with 6.5%. Armenian revolutionary party “Dashnaktsutyun” is not held in Parliament from 4.27%. Voter turnout was relatively low (from 48.63%).

According to Armenian law, the Parliament is formed of parties and blocs, who scored more than 5% and 7% votes respectively. While in Parliament must be submitted at least three political forces.

The results of the vote saying that the unit “step” will get an absolute majority in Parliament, said Pashinyan. “The effectiveness of Parliament connected with the results. It is clear that the citizens of Armenia revolutionary form absolute majority in Parliament. If the trend continues, there will be no need for legislative amendments, will also be a constitutional majority,” — he handed over words in addition to “Armenpress”. “I think we have the mandate to rule the country,” he said in the electoral headquarters of the bloc, refusing further comment until the final results.

Victory block Pashinian was expected. In early November the President of Armenia Armen Sargsyan signed a decree on the dissolution of Parliament and appointment of early parliamentary elections after the Parliament of Armenia for the second time rejected the nomination noted. Pashinyan announced the resignation from the post of Prime Minister in mid-October. His decision, he explained the need to dissolve Parliament and hold early elections of the National Assembly before the end of the year.