Experts have called the appointment Limarenko, the head of Sakhalin “verified by the President”

MOSCOW, December 10. /TASS/. The appointment of the acting Governor of the Sakhalin region, President of the group of companies “ASE” (ASE) Valery Limarenko is an important and balanced decision of the head of state. This opinion was expressed by TASS interviewed on Monday by experts. 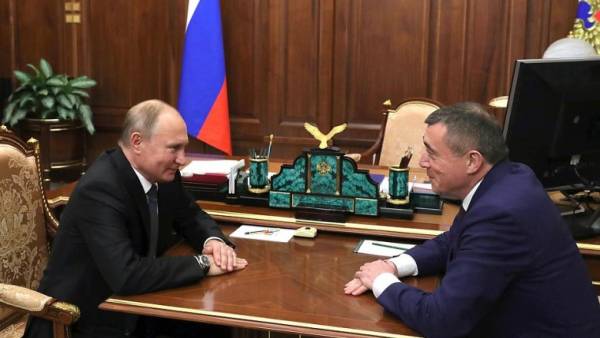 Last Friday, the press Secretary of the President Dmitry Peskov said that the head of state appointed Valery Limarenko, acting Governor of the Sakhalin region. Oleg Kozhemyako, who led Sakhalin oblast more than two years, in September, Putin appointed acting head of the Primorsky territory. On Monday, the Department Secretary was introduced in the office.

According to the Director of the Institute of political sociology Vyacheslav Smirnov, Limarenko is “one of the most striking and significant,” leaders in personnel reserve.

“He has great experience: he started in Nizhny Novgorod region, having passed a way from the Deputy of the city Council of the city of Sarov, later becoming the Minister of housing and communal services of the Nizhny Novgorod region, was the Deputy Governor to such an important direction as construction, energy and utilities, and he has a huge experience in the Corporation associated with the construction and design,” he recalled.

For the President this appointment is extremely important, because Sakhalin is an investment-attractive region in which to implement many interesting projects. In addition, there will be built such an important object as the Sakhalin bridge.Vyacheslav Smirnoviene of the Institute of political sociology

In turn, the political scientist Marat Bashirov noted that the acting head of Sakhalin “equidistant from all groups, that of Sakhalin, as for the forward region of the country, very important.” “The appointment of Department Secretary is a precise decision of the President. He has experience of administration and business management, that is the perfect combination. Plus a huge vote of confidence from the President, who knows Limarenko personally,” added the analyst.