YEREVAN, December 9. /TASS/. Citizens of Armenia re-elected in Sunday of deputies of the National Assembly just eighteen months after the previous parliamentary elections. 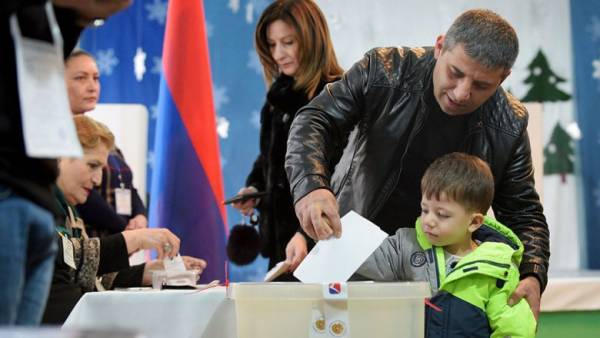 According to preliminary data of the CEC, after processing data from 134 plots in the legislature is likely to pass the four political forces — the block acting Prime Minister of Armenia Nikol Pashinian of “My step”, the party “prosperous Armenia”, the “Enlightened Armenia” and the nationalist party “Dashnaktsutyun”.

As predicted by political analysts, the unit leader of the incident in the spring “velvet revolution” Pashinian is in the lead with an impressive margin — and it is gaining 66,37% of the votes and his closest rival — the party of businessman Gagik Tsarukyan, “prosperous Armenia” — 10,62%.

The “ARF” — 8.43 percent, the “Enlightened Armenia” and the former ruling Republican party of Armenia numbers fluctuate on the brink of the threshold of 5% according to the latest data, this 5.5% and 3.78%, respectively.

Unexpected in this balance of power was the outcome of the Dashnaks according to all polls, the oldest party in the country — “Armenian revolutionary Federation” did not pass in Parliament.

Meanwhile, votes are still counted only 105 sites of 2010, and the picture can still radically change.

To enter Parliament, parties must receive at least 5% of votes, to blocks — 7%. By law, a political force with more than 50% of the votes entitled to receive a constitutional majority in Parliament — 54% of the seats. If it scores less than this quantity, then receives additional space by increasing the number of mandates.

The minimum number of deputies in the National Assembly — 101, but in the current Parliament 105 deputies, as the Republican party in the last election received four additional mandate to have a constitutional majority. If any party gets more than 70% of votes in Parliament it will still be represented only 70% of the deputies, as a 30% mandatory quota for the opposition.