NEW YORK, December 8. /TASS/. The involvement of the former head of the election headquarters of Donald trump Paul Manafort to attempt in 2012 to discredit the leader of the party “Fatherland” Yulia Tymoshenko, should dispel any doubts of Washington as to its reputation. 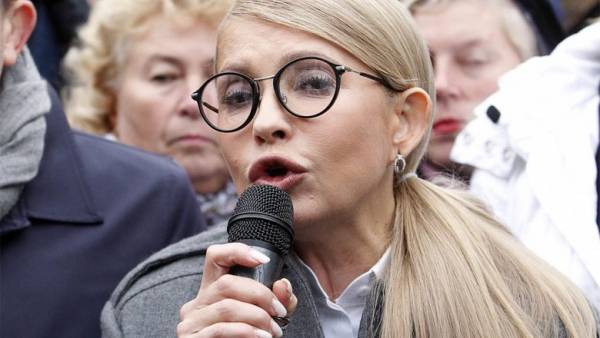 About this Tymoshenko, has announced its intention to participate in the upcoming March 31 of the next year presidential elections in Ukraine, said in published on Saturday an interview with American newspaper The Wall Street Journal.

As aired by CNN, Manafort working for the government of Ukraine as a lobbyist in 2012 addressed to the firm Skadden, Arps, Slate, Meagher & Flom with a request to be one of the expert reports within the framework of the judicial process against Yulia Tymoshenko. Manafort then allegedly asked Skadden to distribute the document among the high-ranking employees of the then US administration.

“Now is solved and is in the public domain. It is clear how much effort, financial resources, time was spent to discredit and destroy my reputation,” — said Tymoshenko. “I think this [kind of] distinction for my work in Ukraine,” she added, speaking about the activities of Manafort.

The leader of “Batkivshchyna”, according to The Wall Street Journal, urged the United States to support the initiative if elected President to seek a diplomatic resolution of Ukraine’s relations with Russia.

If Tymoshenko has called “the most important step for all of us to stop the aggression”. In the number of requests to the U.S., it included the introduction of financial sanctions against Russian entities, the acceleration of Ukraine’s accession to NATO and the us for more military aid to Kiev.

According to the newspaper, the leader of “Batkivshchyna” for a few days in Washington met with the special envoy of the US state Department in Ukraine with Kurt Volker and a number of prominent legislators, including senators Tom Cotton (Republican from Arkansas), and Richard by Urbinum (Democrat from Illinois).