LONDON, 9 Dec. /TASS/ — the Prime Minister said that the refusal of the house of Commons to support the government’s draft agreement on Brexit would dip the country “in uncharted waters” would have created a highly uncertain political situation. 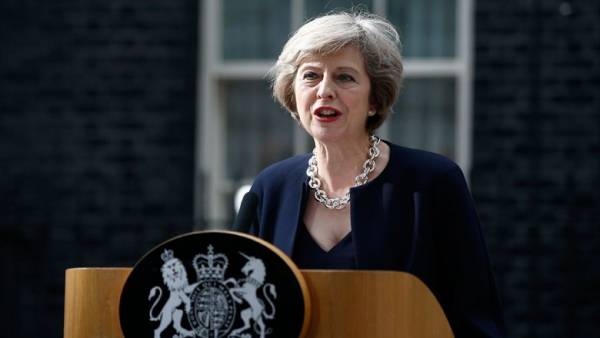 Prime Minister Theresa may believes that if the Parliament rejects agreed upon by the government is a deal with Brussels on the terms of the country’s withdrawal from the EU, it will put Brexit threat will lead to political risks. She stated this in an interview with The Mail on Sunday.

According to the head of the government, the refusal of the house of Commons to support the government’s draft agreement on Brexit would dip the country “in uncharted waters”, that is, would create a highly uncertain political situation.

This would mean considerable uncertainty for the country with a very probable risk of default Brexit. We have the leader of the opposition [leader of the labour party Jeremy Corbyn] who does not think about anything else but attempts to hold a General election, no matter what it cost the country. I believe that the acquisition of Jeremy Corbin authorities — this is the risk we can’t afford to go.

She also responded affirmatively to the question whether it is the optimum figure to continue to lead the Conservative party. Mae also added that receives thousands of messages from ordinary Tory voters who support her.

Meanwhile, in the ranks of conservatives sounds more and more calls to the Prime Minister postponed a scheduled Tuesday vote on the agreement, went to Brussels and made a deal with EU authorities on a new, more favourable for London conditions. Otherwise there is a risk that the advantage of opponents of the current transaction when the vote may be so significant that it will lead to the downfall of the present government, the tories. Weekly newspaper The Sunday Times in this regard, said earlier that may, according to government sources, is going to declare Sunday to postpone the parliamentary vote.