Putin rejected the allegations of conspiracy against Russia Greece

Moscow. 7 Dec. INTERFAX.RU — Russian President Vladimir Putin rejected suggestions that Russia is satisfied with some sort of conspiracy against Greece, and called such claims nonsense. 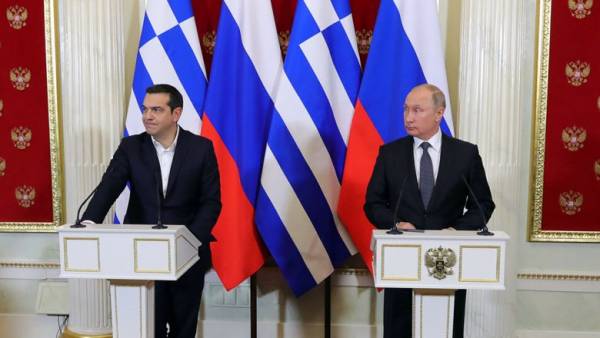 “As for this page (a situation with mutual expulsion of diplomats of the Russian Federation and Greece — if), I think it is important to note that we initially did not agree with the grounds for the expulsion of our diplomats. I can hardly imagine that someone sane and in Greece, and in Russia weaves any machinations against Greece or any conspiracy plans. It’s just nonsense and nonsense,” Putin said after talks with Greek Prime Minister Alexis Tsipras.

If the security services have some questions to each other, which is also possible, that there are many ways to resolve this kind of situation, without any theatrical gestures. I hope that this page is, indeed, inverted.Vladimir Putin President of the Russian Federation

According to Putin, the difficult situation did not prevent the two countries “to work properly and build relationships, including in the sphere of economy”. “It is more important than the reliability of the economy, the partners, the stability of the political system and guarantee investments in large-scale projects”, — said the Russian leader.

“We are ready to work in all directions, including in the field of infrastructure development,” he said.

Prime Minister of Greece Alexis Tsipras said that the situation related to the expulsion of Russian diplomats, was resolved, and while he is Prime Minister, Greece will not change its position under outside pressure.

“While I am Prime Minister, and while we are in the period after 2015 in the acute matters of Russia, Greece does not move from its position under pressure or under the opinion of other third countries”, — said Tsipras in his address to journalists following Russian-Greek talks.