Lukashenka apologized to Putin after his speech “in bad shape”

President of Belarus Alexander Lukashenko has apologized to Russian President Vladimir Putin over a dispute about the price for gas transportation. Mr Lukashenko has told, answering questions of journalists after the EurAsEC summit in St. Petersburg. 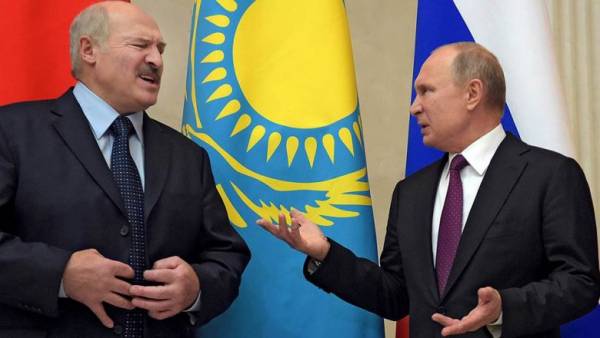 “In bad form (made.— “Kommersant”), so then I had to apologize to the host of today’s meeting. It was very rough explanation, but you’d better not to hear this,” said the President of Belarus.

He also said that next week he plans to meet with Vladimir Putin to discuss any questions. “Next week we meet with the President of Russia and will dot the “i”, that we once again do not enter unresolved problems into the new year,” he added (quoted by “Interfax”).

The President of Belarus at this meeting said about the high cost of transporting Russian gas to the country. According to him, the tariff for transporting gas from Yamal to Belarus is $3 per 1 thousand cubic meters on 100 km. He added that the domestic rate of three times less.

Lukashenka argued with Putin about gas prices: like fought together, and better conditions for Germany

In response to his words, Vladimir Putin has offered to debate without the press “openly and honestly”. He noted that this year the gas price for Belarus is $129 per 1 thousand cubic meters, and in 2019 will be $127. The Russian President added that Germany, for example, the price is $250.