MOSCOW, 5 Dec — RIA Novosti. Ichthyosaurs were almost indistinguishable in appearance from modern whales and dolphins — they were soft leather, a thick layer of fat and a similar camouflage coloring. Write about this chemists and palaeontologists, published an article in the journal Nature. 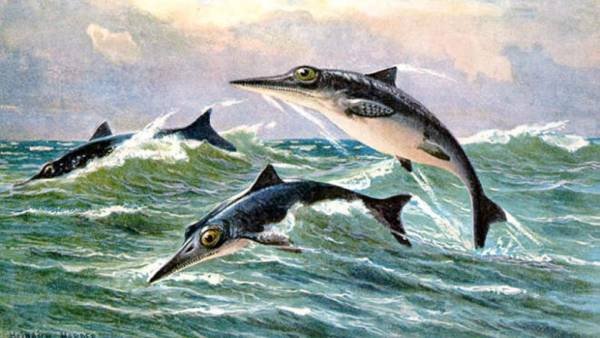 “We have found the first unequivocal chemical evidence that ichthyosaurs were warm-blooded creatures. The subcutaneous layer of fat found only in animals, are able to maintain their body temperature. On the other hand, they were still reptiles — their skin has lost scales in the same way, as did the ancestors of modern sea turtles,” says Mary Schweitzer (Mary Schweitzer) from the University of Lund (Sweden).

Whales of the Mesozoic

The seas and oceans of the Mesozoic era was inhabited by a variety of large marine reptiles, including the fish-like ichthyosaurs, the “Loch ness” the plesiosaurs, and crocodiles like pliosaurs and mosasaurs. Contrary to popular in the society views that these dinosaurs had nothing to do with dinosaurs and had relatives of modern lizards and other reptiles.

Their appearance and behavior are still a mystery to paleontologists as the remains of these reptiles are rarely preserved in rocks of the Earth because of the peculiarities of the environment in which they lived. However, over the past two decades, scientists have discovered many interesting facts about their lives, radically changed the idea of how they lived and what they ate.

For example, three years ago, scientists found that ichthyosaurs went on to live birth before the transition to life in the sea, and found out that pliosaurs, the main marine predators of the Cretaceous period, was suffering from cancer and arthritis. In addition, other features of their anatomy have indicated that they have much in common with modern sea mammals, occupied the niches which became free after the extinction of the marine reptiles giant 65.5 million years ago.

Schweitzer and her colleagues put an end to the controversy surrounding the appearance and behavior of ichthyosaurs thanks to a surprising find in a career Holzmaden, located in the vicinity of the German Stuttgart.

This area of Germany, as the scientists explain, about 180 million years ago was at the bottom of the Tethys sea that covered most of Europe at the time. Many shoals and bays of the reservoir was almost completely devoid of oxygen, so that their bottom prints preserved even the soft tissues of the body of the ancient animal.

Two years ago, her team came across the remains of amazing — they managed to find a nearly complete skeleton of the ichthyosaur of the genus Stenopterygius, as well as prints of his skin, body tissues and many internal layers.