Moscow. 4 Dec. INTERFAX.RU — NATO Secretary General encouraged allies to prepare for a world without the Treaty. 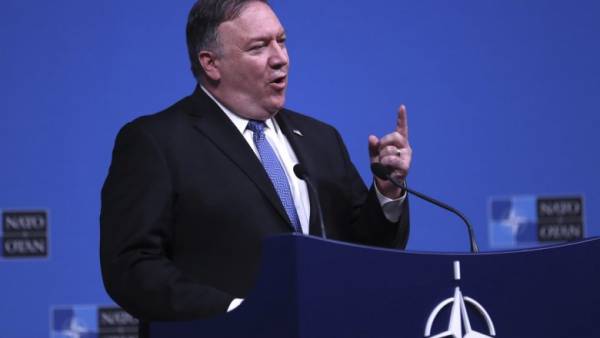 The United States will suspend its obligations under the Treaty on intermediate and shorter-range missiles (INF Treaty), if Russia within 60 days will not return to his execution, said on Tuesday the US Secretary of state Mike Pompeo.

“In the next 60 days they (Russia — Interfax) has all the chances to do so (to return to compliance with the INF Treaty — if). And we will welcome it… within 60 days we still will not produce or place any systems (not relevant to the INF Treaty — if). Let’s see what will happen during these 60 days,” said Pompeo at a press conference of NATO in Brussels.

In his statement, released on Tuesday, NATO supported the US position. “The allies came to the conclusion that Russia has developed and adopted a missile system 9M729, which violates the INF Treaty and poses significant risks to Euro-Atlantic security”, — the document says.

“We call on Russia to urgently return to full and reliable compliance (the INF Treaty — if). Now the question of preservation of the contract depends on Russia,” it says.

According to the statement, the Alliance and the United States over the past five years has brought to Russia its concern over the situation around the INF Treaty. However, according to the Alliance, Russia only recognized the existence of 9M729, but did not provide information about her.

While the Alliance said that the US on its part to fully comply with the INF Treaty, and unilateral observance of this Treaty is unacceptable.