WASHINGTON, 5 Dec — RIA Novosti. A senior official of the US state Department said that the incident with the detention of military ships of Ukraine in the Kerch Strait at the border violation of the Russian Federation should force the EU to abandon the “Nord stream-2”. Earlier, the German foreign Minister has stated that the incident in the Black sea did not change the relationship of Berlin to the construction of this pipeline. 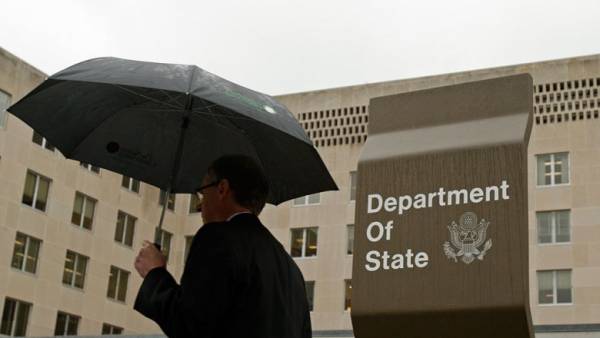 Transcript of the official press service of the state Department. The name of the representative office is not specified, but one of the fragments of speech he calls himself a co-chair of the Commission, the USA and Ukraine on strategic partnership. It is known that on the American side, this Commission is chaired by Secretary of state Mike Pompeo, and the Ukrainian foreign Minister Pavlo Klimkin.

State Department spokesman added that the question of the construction of the pipeline was discussed with German politicians, who after the incident in the Black sea have become more responsive to calls US “Northern stream-2”, because, according to him, the incident “resonated with public opinion in Germany.”

Germany, the largest EU economy, supports “Nord stream-2”. Foreign Minister of Germany Heiko Maas after the incident in the Kerch Strait, said that “Nord stream-2” — commercial project and no country will benefit if the German or other European companies will refuse to participate in it.

The project “Northern stream-2” involves the construction of two pipelines with a total capacity of 55 billion cubic meters of gas off the coast of Russia through the Baltic sea to Germany. Against the project actively support Ukraine, which fears to lose the income from the transit of Russian gas, and a number of European countries, including Poland, Latvia and Lithuania and also the USA, the EU promotes its liquefied natural gas. They called the project the political and threatening Europe’s energy security. The Russian side has repeatedly stated that the project “Northern stream-2” is a completely commercial, competitive, and pointed out that it does not involve the termination of Russian gas transit through Ukraine to the EU.