Relations between Russia and Ukraine is back in the spotlight of the Alliance. 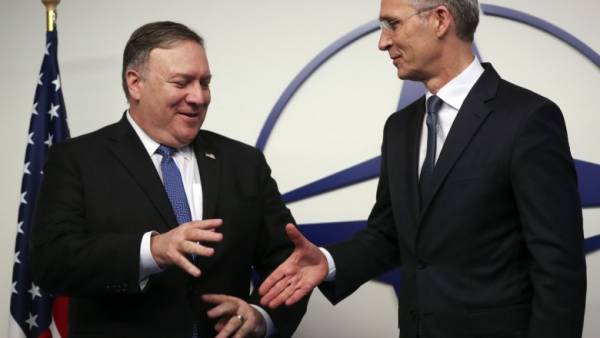 “Destabilizing behavior of Russia” has once again become a Central theme of the Ministerial meeting of NATO. The foreign Ministers of the Alliance adopted a statement in which he accused Russia of violating the agreements it has with the United States in 1987 Treaty on intermediate-range nuclear forces (INF). According to Secretary of state Mike Pompeo, Moscow given 60 days to respond to the allegations.

The Ministers discussed the recent incident in the Kerch Strait. We will remind, shortly before it the President of Ukraine Petro Poroshenko urged to send in the Black and Azov sea NATO ships and in General to strengthen the support of Kiev. Being in the headquarters of NATO, the correspondent of “Kommersant” Pavel Tarasenko caught every word in the speech of the NATO Secretary General, Jens Stoltenberg, who spoke much on this subject, but nothing said.

The theme of Russian-Ukrainian relations, as admitted in a conversation with Kommersant’s interlocutor in the Brussels headquarters of NATO by the autumn of 2018 gradually gone on the agenda of the Alliance on the backburner.

Recently, the discussion was limited to the rhetoric about the need for the implementation of the Minsk agreements on the settlement of the conflict in the Donbass. Second wind discussion has given a recent incident in the sea of Azov.

His position, NATO Secretary General Jens Stoltenberg outlined on Monday on a two-day meeting ahead of a press conference. He called unacceptable the use of Russian forces and called on all parties to the conflict to show restraint. This thesis Mr. Stoltenberg reiterated on Tuesday again.

We will remind, the conflict broke out on November 25, when three ships of the Ukrainian Navy tried to pass from the Black to the Azov sea (according to Moscow through the territorial waters of the Russian Federation), but was stopped by Russian border guards. The ships opened fire, killing three Ukrainian sailors were injured. The ships were detained, 24 Ukrainian servicemen arrested.

After this incident, the President of Ukraine Petro Poroshenko did not get tired to repeat: in order not to allow Russia to “act aggressive” in the Black and Azov sea should visit the NATO ships. Meanwhile, in the headquarters of the Alliance were given to understand that nothing but what’s already being done, there not going to take. As recalled on Tuesday, Jens Stoltenberg, NATO has “significantly strengthened its presence in the Black sea”: this year, the Alliance ships were there a total of 120 days (previous year — only 80 days). The sea of Azov in the context of the call of Peter Poroshenko, he decided not to mention at all.

On Tuesday morning journalists continued to ask Jens Stoltenberg about what NATO is ready for Kiev. “Would the Alliance support for Ukraine in case of direct aggression of Russia?” — asked the Secretary General. But the answer, apparently, was hoping asking the question, have not been received.

All countries in the Alliance provide a strong political and practical support for Ukraine, its sovereignty and territorial integrity. NATO countries are also contributing to the strengthening of the armed forces and security forces of Ukraine through various trust funds, including cyber security.Jens Stoltenberg

“Since the illegal annexation of Crimea, our support of Ukraine is growing exponentially, assured journalists at a briefing on NATO’s relations with Russia and Ukraine, a source in the headquarters of the Alliance.— Adopted a comprehensive package of measures, which includes 40 different projects. Many programs and projects are under implementation. We are talking about the development of systems of governance, countering cyber operations, and modernization of the Navy. We work closely with state agencies in Ukraine, for example, provide their advisers.”

— You say that was done before the incident. And what was done after? — journalists were interested in.

— Convened an emergency meeting of the Commission NATO—Ukraine. It understood what needed to be done. In addition, NATO issued a statement urging Russia to return the captured ships and sailors.

— We are talking about one statement and one meeting? — did not give the participants a briefing.

Is NATO representative could only reply that the foreign Ministers meeting hasn’t even started, and after it will be a press conference (and there surely something will be announced).

— In fact, nothing new planned?

All we do is long — term investment on the part of NATO. Some specific support is still in the framework. The end result — strengthening of potential of Ukraine, — said the NATO official, and once again urged Moscow “to ensure a de-escalation, to exercise calm and restraint, and to release the sailors.”

Not all the briefing participants considered the latter requirement is workable.

— How can we let the sailors to court, because they violated the law by going into the water, which was Russian before the return of the Crimea? asked by a journalist from the Russian state media (this was previously said, in particular, Russian President Vladimir Putin).

— General! These waters have always been common! he didn’t stand sitting across from his Ukrainian counterpart.

The NATO official, meanwhile, played the role of peacemaker, deciding to close the issue threatens to escalate into full-scale conflict. “I will not go into the legal aspects,” he said, after that, however, reiterated that NATO’s position is clear: “without any reason force was used”.

And not waiting for concrete answers about whether to wait now campaign “NATO squadron” in the Black and Azov seas, journalists turned his attention to other recent initiatives of a number of Ukrainian politicians, in particular the idea of opening the country a NATO military base and ceiling for the Russian ships of the Bosphorus (the decision can theoretically take the Turkey). But these questions, the representative of the Alliance decided not to comment.

In the late afternoon, after the Ministerial meeting, to go through the same “interrogation” had to the Secretary General. But here to achieve something new reporters failed. Jens Stoltenberg limited to generalities about what “Russia is trying to use the annexed Crimea to expand its influence and control over Azov” and NATO “for the last two years significantly strengthened its presence in the region” and to stop there is not going to.

This post on a tribune the Minister of foreign Affairs of Ukraine Pavlo Klimkin gave to understand that in any case the discussions in Brussels was satisfied, “supporting allies was a definite” had been discussed “a lot of concrete solutions” and, in particular, the Ministers are not spared plans to increase NATO presence in the region of the Azov sea. “How this happens is the subject of further conversation,” — said Mr. Klimkin.

The conflict between Russia and Ukraine in the Kerch проливе11:09 (GMT)Andriy Parubiy the letter asked the US government to impose sanctions against России4 dekabrya Europe thought about the expansion of anti-санкций4 decabrachia declared wanted by the eight Russian citizens involved in the arrest of Ukrainian seamenFor what do rockets

Of Russia in the headquarters of NATO in these days remember when discussing another topic — the present and the future of the INF Treaty in 1987, limiting the possibility of the United States and the Soviet Union on the creation of intermediate-range and shorter-range. Washington accuses Moscow of violating the Treaty by testing a prohibited range cruise missiles, ground-based 9М729, which was created by the Yekaterinburg experimental design Bureau “Innovator”. A few hours before the meeting of the NATO high-ranking source in the US state Department told reporters that the meeting in Brussels, the officials will use “very strong words” and I hope to coordinate with allies on a common position.

Jens Stoltenberg made it clear that the problems with this should arise. “None of the agreements on arms control will not work if only one side abides by it,” said the Secretary General at the first press conference, hints of exactly who fails to comply with the provisions of the document. “We are concerned about the new Russian missile that threatens the INF Treaty”, — he spoke openly on Tuesday morning upon arrival in the headquarters of NATO. The Secretary General avoided a direct answer to questions about whether the US is right at the meeting to formally announce the withdrawal from the Treaty with Russia.

Meanwhile, U.S. Secretary of state Mike Pompeo spoke at the Brussels office of NGO “German Marshall Fund of the United States.” In his speech he recalled Russia many things: conflicts with Georgia and Ukraine, and the poisoning of ex-GRU officer Sergei Skripal, and finally, “years of failure to abide by” the INF Treaty. “When contracts are violated, the violators should be resisted. A contract should either fix or get rid of them,” he said, still keeping the suspense about the future action (or inaction) of the White house.

In the United States unity on the future of the INF Treaty no. On the eve of the influential Senate Democrats Bob Menendez, Jack reed and mark Warner wrote a letter to President Donald Trump, in which he said: Russia violates the Treaty, but to leave it is impossible, because such a step reinforces the stereotype that the US wants “to break their commitments unilaterally, without any strategic alternatives.”

“Even our European friends sometimes say that we are not in the interests of the planet. It’s simply not true,” said the Marshall Fund Mike Pompeo. But in fact, he said, “the international order undermine Iran and China”, and the US goal is “to reform the international liberal order.” “And we want our friends helped us,” he added.

In accepted following the meeting, the statement claimed that Russia had violated the Treaty, creating a rocket 9M729, while the United States is “fully fulfilled its obligations since the agreement enters into force.” NATO members agreed to continue to consult with each other on this issue, and to follow the further actions of Moscow.

“We call on Russia to urgently return to full and verifiable implementation of the agreements — said at the end of the statements by the representatives of 29 countries and concludes: — whether the INF Treaty, now depends on her.”

According to Mike Pompeo on Russia’s response given 60 days.

The Treaty on the elimination of intermediate дальности12:59 (GMT)In the General staff spoke about Russia’s response in the event of cancellation ДРСМД10:05 (GMT)Military commentator Alexander Golts: no INF Treaty we are somewhere on the eve of the Caribbean кризиса4 Cabrerisse rejected accusations that the US and NATO of violating the INF Treaty