Azerbaijan will not be able to buy coastal missile system because of the position of the Russian military. 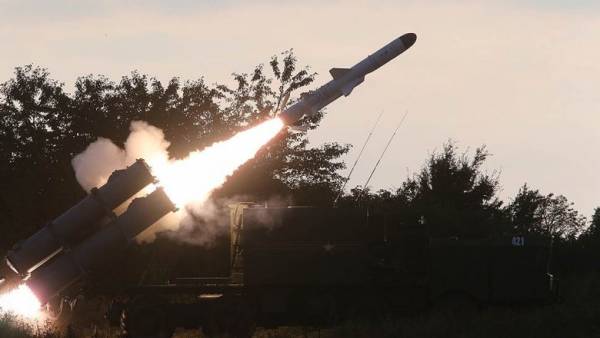 As found “Kommersant”, the delivery of the armed forces of Azerbaijan coastal missile complex (BRC) “Bal-e” fell through because of the position of the defense Ministry. The Russian military considered that even an export modification of the missile of the complex can be a potential threat to the ships of the Caspian flotilla of the Russian Federation, located in Russian territorial waters. The refusal to supply one product for Russia is not critical: in recent years, Azerbaijan has purchased Russian weapons and equipment in the aggregate of $5 billion.

The first information about the readiness of the Azerbaijani military to purchase the divisions of type “Ball” in the export version appeared in 2014, when the manufacturer of the complex — the Corporation “Tactical missiles” (tactical missiles Corporation) at the exhibition of arms and military equipment KADEX 2014 in Astana (Kazakhstan) held a special presentation of this BRK. Interest seemed logical, since Azerbaijan has long kept an eye on missile systems that can cover the coastal area of Caspian sea. Thus, the Azerbaijani military was interested in the coastal missile complex “Bastion” with anti-ship missile “Yakhont” (manufactured by NPO mashinostroeniya, Reutov), but subject to negotiations and not reached because the corresponding visual signal on the talks in Moscow did not.

But the topic of “Balls” its continuation was received. According to a source””, familiar with a situation, even initialed the contract, which involves the signing of a small party of DBK and several dozen rockets 3М24 (export version of the KH-35E). However, before the signing of a solid agreement, it never came. As told “Kommersant” several military interlocutors, the reason for this was the special stance of the defense Ministry, which was to “inappropriate delivery of these systems to ensure the safety of navigation of ships of the Caspian flotilla”.

According to them, the calculations showed that even the export version of the missile can carry a potential threat to Russian ships in Russian territorial waters.News

“To argue with that argument was useless, so initialed, the agreement was retracted in the table, our position was heard,” confirmed one of the military officials. The Ministry of defence of the Russian Federation “Kommersant” have sent the corresponding request to comment on this information (at the time of writing a response had not been received). The Federal service for military-technical cooperation and the “Rosoboronexport” (the Russian exporter of armaments) from comments “b” abstained.

“Bal-e” — export version of the coastal missile complex “Ball”, taken into service in Russia in 2008. Developed in JSC “machine-building design Bureau” (Moscow). The composition of the mobile complex includes self-propelled command centers, control and communications, self-propelled launchers with anti-ship missiles KH-35E, transport and handling machine. Designed for control of territorial waters, protection of bases, infrastructure, coasts and sea communications. Range — up to 120 km, the total ammunition complex — up to 64 missiles.

In case of conclusion of a binding contract, Azerbaijan has become the third country, who have adopted the system of the “Ball”.

Its launch export customer was supposed to be Libya, but due to the outbreak of the country’s civil war in March 2011, President Dmitry Medvedev signed a decree imposed an embargo on the supply of military products. The total amount of lost profits for KTRV exceeded €300 million, the News

Source explained the presence of Prigogine at the meeting, Shoigu with the Libyan Marshal

In the end, the first foreign state, armed “Balls”, was Vietnam: in December 2012 it was reported that the tactical missiles Corporation has completed the contract to supply the country anti-ship missiles 3М24 for this BRK. Russia, incidentally, “Balls” are in service of the 46-th separate division of coastal missile and artillery troops (RIGHT) of the Caspian flotilla (Izberbash), 11 brigade BRAVE black sea fleet (UTAS), 15th brigade BRAVE black sea fleet (Sevastopol), of the 72nd regiment of BRAVE Pacific fleet (Smolyaninovo). Another division of the KDB in 2016 have taken up on combat duty on the island of Kunashir.

Now the issue of supply “Ball” to the armed forces of Azerbaijan is not discussed, said another high-ranking source””, since there is a “very delicate geopolitical nuance”. Recent years, homing missiles Kh-35 was modernized to defeat not only the sea but also ground targets. “We do not really wish the weapons were used in the Nagorno-Karabakh conflict”, — he concluded. Similar work note was done with homing cruise missile “Onyx”, a member of BRK “Bastion” in November 2016 military first used it to attack ground targets in Syria, destroying industrial targets of radical Islamists.

Failure in the supply of Ball to a cooling of relations between Moscow and Baku should not lead. In September the President of Azerbaijan Ilham Aliyev stated bluntly that “cooperation in military-technical cooperation has a long tradition”, “the contracts implemented between Russia and Azerbaijan exceeded $5 billion,” and “tend to increase”.