The Tver officials filed a train to temple

Governor Igor Rudenya took their subordinates for the Liturgy of the Patriarch. 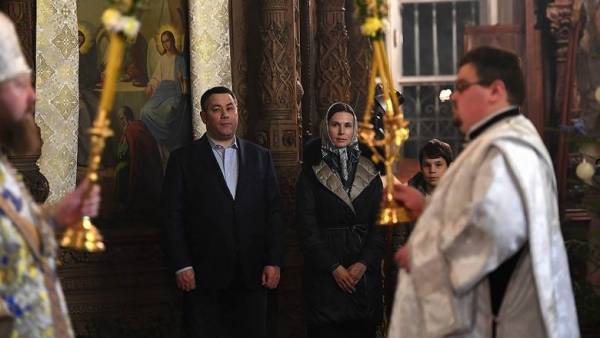 Nearly 200 of the Tver officials and deputies on December 4 went to the divine Liturgy Patriarch Kirill, dedicated to the 700th anniversary of the feat of Prince Mikhail of Tver. To refuse was impossible, in spite of faith or belonging to a denomination. The Liturgy itself was to be held in Tver, but at this time do not have time to restore Spaso-Preobrazhensky Cathedral founded by the Prince. According to analysts, such a trip away power from voters.

of the Ural hunters officials gave thanks pedicure sets

Early on the morning of December 4, nearly 200 officials and deputies of the Tver region on specially ordered “Swallow” went to Moscow at the divine Liturgy the Patriarch in the Uspensky Cathedral of the Kremlin.

The trip was organized by the government of the region, it was included in the plan of work of officials, waivers or substitutions are not allowed. For the Liturgy to “Swallow” went to the Deputy Governor, the Ministers, the speaker and deputies of regional Parliament, heads of regions, the Chairman of the electoral Commission, the Commissioner for human entrepreneurs.