“With their garbage will understand”

Residents of the Arkhangelsk region came out to protest against the import of waste in the Moscow region. 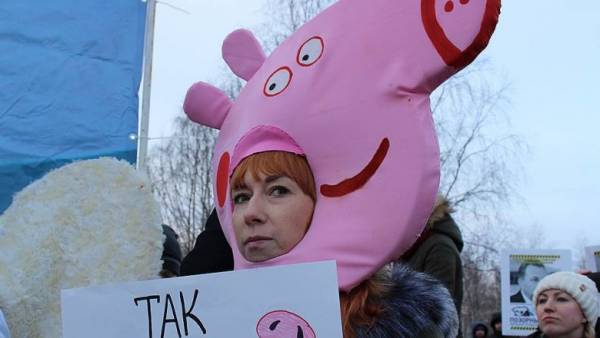 December 2, Arkhangelsk oblast, a wave “out anti-rubbish” rally: residents of a dozen villages and cities came to protest against the importation of waste from Moscow. The largest rallies in Arkhangelsk and Severodvinsk has collected, according to “Kommersant”, about 3 thousand people each. To Express the discontent of the inhabitants of the region came with their families — the protesters demanded the resignation of the Governor of the region and opposed the transformation of the region into the “trash”. However, according to people familiar with the situation of the interlocutors “Kommersant” that the meetings could be political overtones.

To get by public transport to the venue of the protest action in Arkhangelsk was not easy: the buses are crowded, transport and only heard talk of a future “Pomor dump”. As for personal transportation, Parking cars was not enough. People abandoned their vehicles in nearby residential yards. Gagarina street in Arkhangelsk turned into one big traffic jam. On duty in the streets, the police behaved correctly, efficiently helping to find accidentally lost in the crowd of children. Near a makeshift stage shouting slogans: “Pomerania is not a dump!”, “Orlov resign!”. Supporters of building a new landfill in the Arkhangelsk region, which is usually always visible at such events, on Sunday it was impossible to find.

Recall, on 18 October, the Commission on investment policy and competition development in Arkhangelsk region chaired by Governor Igor Orlov approved the investment project on creation. “Sies”.

According to the project, it is planned to bury annually 500 thousand tons of waste piketirovanijah from Moscow for 20 years.

From the Moscow budget in 2018-2020 to run. at the station Sees in the Arkhangelsk region it is planned to spend 10.5 billion RUB, creating 500 jobs and providing a 912,1 million rubles of additional tax revenues to the regional budget in six years.

“No examination is still not conducted, — said the scene Marina Gorbunova, presented by the ecologist.— We in the region has many rivers, lakes, wetlands, precipitation. I can only imagine what enormous proportions can reach the pollution of water and soil if the landfill leachate will get into the tributaries of the Northern Dvina and then to her water. We have a lot of protected areas. Slusarev, we all lose! Before you design and build, you need to conduct a survey, not to overwhelm us Moscow trash.”

Wave “out anti-rubbish” theme picked up by deputies from the CPRF and the LDPR. Yesterday, December 1, at the same place the meeting was held in Arkhangelsk Communists. They made an appeal to the citizens about the collection of signatures against the current Governor of the Arkhangelsk region Igor Orlov. The collection of signatures for the resignation of the head of the region continues. On Sunday, the Deputy of the Arkhangelsk regional Assembly from LDPR Igor Arsentyev said that the region’s residents fall asleep MPs with accusations of inaction. According to him, the project to import in the region of the capital waste is contrary to the opinion of the population: “no one will support the import of waste in Arkhangelsk oblast”. “Indeed, the problem of storage and recycling has matured, — he admitted.— But with their garbage, we will understand ourselves, why do we waste Moscow?”.