TASS, 1 Dec. According to the publication Asharq Al-Awsat, “hot greeting” leaders under the TV cameras “confirms the positive relationship” between them. 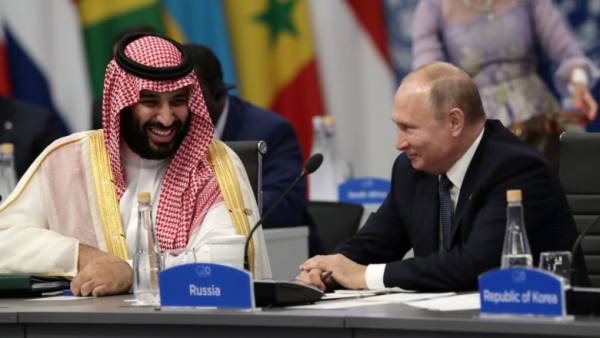 The first meeting of the crown Prince of Saudi Arabia Mohammed bin Salman al Saud and of the President of Russia Vladimir Putin on the sidelines of the G20 summit in Argentina was held in a friendly and relaxed atmosphere. This assessment of the leaders ‘ meeting gives the Saudi newspaper Asharq Al-Awsat, by placing the Saturday front page photo of the smiling President and the crown Prince.

As the newspaper notes, “hot greeting” leaders under the TV cameras tells about friendship and confidence, as well as “confirms the positive relationship” between them.

The publication called the meeting of Putin and crown Prince “of the key event of the first day of the summit.” Footage depicting the conversation of the leaders before the summit, the Saudi press publish and post on their websites Arabic TV channels.

Murder mystery Saudi журналиста27 noyabreva of the Turkish foreign Ministry believes that the journalist’s Kalkaji dismembered under музыку22 noerregade Hürriyet reported compromising of the CIA to Saudi crown Prince on the case Хашкаджи20, noyabrya-Riyadh rejected the version about the involvement of the crown Prince to the murder of Kalkaji

Asharq Al-Awsat notes that despite attempts to isolate the crown Prince on the background of the scandal with the murder of journalist Jamal Kalkaji, “the leaders of the largest economies in the world welcomed him.” During the work of the forum, the heir to the Saudi throne held talks with Prime Minister Narendra modi, Chinese President XI Jinping, Prime Minister of great Britain Teresa may. On 1 December a scheduled meeting with the Russian leader. As stated earlier the assistant to the President Yuri Ushakov, on the agenda the situation in Yemen, Syria, and also questions of bilateral cooperation.

The G20 summit takes place in Buenos Aires from 30 November to 1 December.

Read also: Putin and trump did not greet each other at the G20