Russian President Vladimir Putin called the current Ukrainian government is the “party of war”. He stated this during a press conference at the summit “Big twenty” in Buenos Aires, reports RIA Novosti. 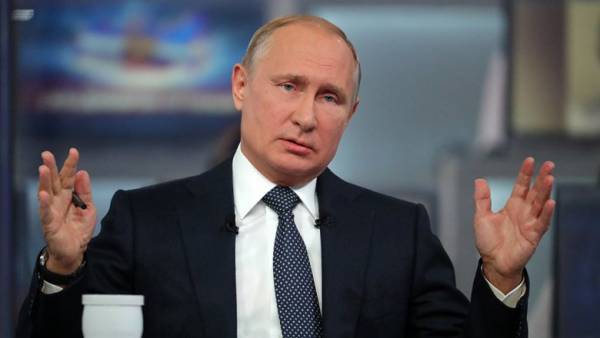 “The current leadership of Ukraine is a “war party” is in power, the military actions will continue,” he said. Putin noted that he is saddened by the lack of interest of Kiev to resolve the situation in the Donbass and the incident with the Ukrainian ships in the Kerch Strait.

The Russian leader drew attention to the fact that Kiev has imposed martial law in the country ahead of the elections.

“For what? Naturally, in order to restrict civil rights and freedoms, to restrict the political activity in the country. But what’s even worse, because it imposed martial law 10 regions — just those in which the incumbent President does not enjoy special support and finds his policy there is unanimous approval. This means that the current leadership of Ukraine with his own hands he divided the country — and not very trustworthy,” said he.

Putin has told that does not refuse high-level contacts with his Ukrainian counterpart Petro Poroshenko, although “hard to communicate, just do not understand what to say, nothing is performed. In terms of some of the fighting, in terms of provocations … the oligarchic power is always easier to continue a policy aimed at robbery of its own people and their state. This is the case when we, in Ukraine, described in a few words: to whom war and to whom mother is native”, — concluded the President.