The correspondent of the TV channel RT France Luc Leger was injured during the live broadcast of the Champs-elysées in Central Paris. This was reported in the Twitter channel. 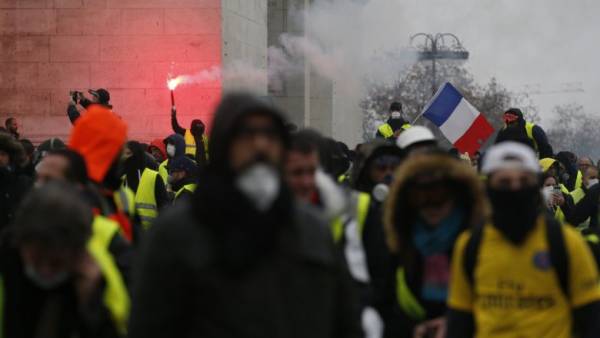 It is noted that the journalist was injured by a rubber bullet that police probably used to disperse the protesters.

On the published pictures show that the bullet struck Leger in the lower jaw. He added that he was injured, despite the fact that it was easy “to identify as a journalist.”

Before 1 December it was reported that the police used tear gas against the protesters. Arrived at the scene of demonstrations, the Minister of internal Affairs of the country Christoph Kastner tried to encourage protesters to remain calm and support the police officers who stand in a cordon.

Protests against rising prices for gasoline and diesel fuel began in the country on November 17, the movement was called “yellow jackets” on obligatory attribute of French drivers — yellow reflective tabard. Later, their discontent turned to outrage at the policies of President Emmanuel Macron, who, in the opinion of ordinary people, far from their everyday problems. During the demonstrations suffered at least 409 of the French, including 28 government representatives.