The President of Ukraine Petro Poroshenko has accused Russian President Vladimir Putin’s intention to revive the Russian Empire and the desire to seize the Ukraine. He stated this in an interview with German newspaper Bild. 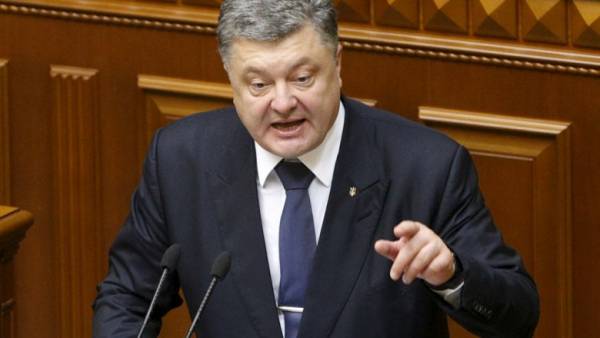 “Putin wants to restore the former Russian Empire. Crimea, Donbass, he wants the whole country. He sees himself as the Russian Emperor, whose Empire cannot function without Ukraine. He sees us colony,” — said Poroshenko. Since then, Poroshenko headed the country in 2014, according to the President, Ukraine has ceased to be a colony of Russia.

Poroshenko explained that the need to protect Ukraine. For this reason, according to him, he imposed martial law after the incident in the Kerch Strait. “As in 2014, Putin wants to Annex another part of Ukraine, it behaves the same as then,” added the President.

In addition, Poroshenko expressed hope that the allies will send their warships into the Azov sea to help Ukraine and to ensure security in the region. In the Kremlin are the statement of the Ukrainian President called provocation. Putin’s press Secretary Dmitry Peskov explained the words Poroshenko his political interests ahead of the presidential elections.

The incident in the Kerch Strait took place on 25 November this year. As reported by the FSB, the ships of the Ukrainian Navy, two armored and tow, entered territorial waters of Russia in the Crimea and moved in the direction of the Kerch Strait, maneuvering dangerously and not obeying the demands of border guards. As a result, Russian border guards detained the ships and sailors. In response to the Ukraine for a month imposed martial law 10 regions of the country.