The civil war — a source of enrichment for the militants. Tell with whom they do business and what’s the Russian. 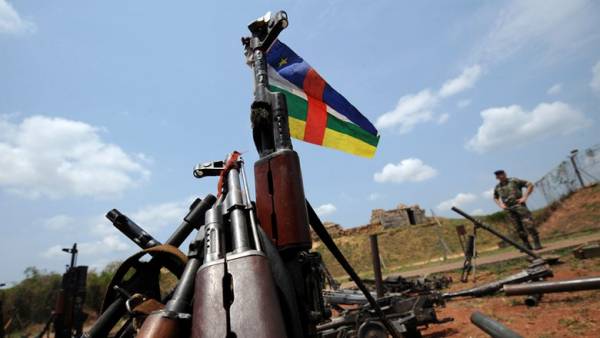 The rich of gold and diamonds in the North-Eastern Central African Republic, fighting for access to which has joined Russia and China in the past two decades changed hands. And it is not the government, and the leaders of the militants, who in the pursuit of the right to own natural resources consumed hundreds of civilians and put “under the gun” children-countrymen. But the Europeans and Americans that help to change the resources for money, such trifles do not confuse.

The civil war in the Central African Republic is not a confrontation between religions or tribes, but only the struggle for resources. Ethnic cleansing and the killing of infidels serve one purpose: to oust competitors from areas of oil production and diamond and gold mines.

Better than others over the past seven years to lead this struggle was the ideological leader of the Democratic front of Central African Republic people (FDPC) of Abdoulaye Heesen. His troops together with allies (and former enemies) of the UPC in control of the mine Ndassima who planned to attend slain Russian journalists.

With Abdoulaye by Heesen in August 2018 negotiated by the adviser to the President of the Russian TSAR Valery Zakharov.

But the leader of the FDPC had partners abroad long before the appearance of the CARS Russian. Some helped him to sell oil, others diamonds, others gold (another type of “business” is associated with smuggling and illegal driving of cattle, but the Europeans are involved).

Rich in gold and diamonds in the Central African Republic has oil reserves. They are in the North of the country, on the border with Chad. In 2007, the CAR government signed with Chinese state-owned company Poly Technologies a contract on exploration and production of oil in two huge areas. The civil war prevented full-fledged development, and the fate of the contract was in the fog.

“a Country stuck in time”: that Russia is seeking in Africa

According to WikiLeaks, the agreement was terminated in 2011 and was used to supply weapons to bypass the sanctions (the main activity of Poly Technologies, the arms trade). African media claim that the contract was valid until 2017. Anyway, Poly Technologies of the CARS are gone and, like our compatriots, the Chinese are actively establishing ties with the government and the President.

But when the Central African oil was planning to remove the militants from the Central African Republic has actively traded the neighbor — from Chad. Mercenaries from that country fought in the ranks of the FDPC and other groups, and Abdoulaye Heesen was close directly to the President of Chad, Idris Deby.

The head of the FDPC has converged with high society Chad, when, in 2009, began trading in this country of luxury cars (at the same time in Central African Republic, Abdoulaye Heesen controlled the traffic of gold and diamonds in the North of the country). Together with officials from Chad in 2014, he created the company Abi Tchad, which was engaged in oil supply (oil fields in Chad are next to the CAR, so the presence of the signatures of the action of the agreement should not be surprising). According to the American HKO The Sentry, partner Abi Tchad became a Swiss company Mezcor SA.

Each of them is so eventful career that contracts with the militant mastermind behind the ethnic cleansing — should not be surprising. More distinguished Richard Levinson. After the war in Iraq and he worked for a contractor, Custer Battles, carrying out the orders of the US administration (delivery of the equipment and functions of the PMC) in this middle Eastern country. But in 2004 the company was caught cheating and was suspended from government contracts.

Richard Levinson never put up with that and with the son of a Romanian General of the foreign intelligence Service established a firm Danubia Global Inc., which assumed all the functions of Custer Battles in Iraq. They stayed in the country for another two years, until in 2006 the soldiers of Danubia Global Inc killed three civilians in Fallujah.

The following enterprise Levinson was the same Swiss company Mezcor SA in which he began to work with the Portuguese Goanese. From the Middle East, the American switched to Africa. And more specifically, Nigeria.

They began to work with the Minister of petroleum resources of Nigeria Diezani Allison-Madueke (in 2014 she became the first female President of OPEC). According to journalists from the Sahara Reporters, cousin Minister Donald Chidi Amangbo got 49% in Mezcor SA (the remaining 51% was from Levinson and Goanese).

Mezcor SA and another us firm-Portuguese Duo and cousin of the Minister — Tradax SA — received from the Nigerian national petroleum Corporation, which was led by Allison-Madueke, contracts for oil production.

In 2015 Diezani Allison-Madueke arrested in the UK. The Nigerian authorities suspect that the ex-Minister of oil were able to steal, thanks to its in-house schemes, six billion dollars.