MOSCOW, 27 Nov — RIA Novosti. The official representative the Ministry of foreign Affairs Maria Zakharova said the words of the head of the Ukrainian foreign Ministry Pavel klimkina about the fact that Kiev does not need diplomatic relations with Moscow, saying that Russia is responsible for resolving any problems with Ukraine. 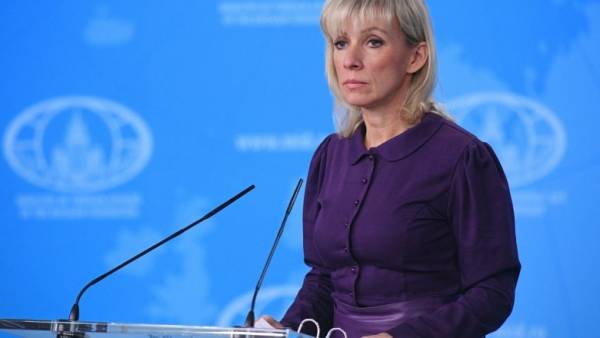 Previously Klimkin said that diplomatic relations with Moscow has exhausted itself, but to break Kiev is not yet ready. His words came against the background of the incident in the Black sea with ships of the Ukrainian Navy.

“After all, that is what the mode, the mode in which he (Belarus — ed.) involved, created a number of provocations, the outrages, so many lies was poured, is they question whether diplomatic relations”, — said Zakharov in the program “Evening with Vladimir Solovyov” on TV channel “Russia 1”.

On Sunday, three ships of naval forces of Ukraine had violated Russian border and maneuvered in a dangerous manner, failing to respond to legitimate demands to stop immediately. Ships with 24 sailors were arrested, three Ukrainian military were wounded, they are hospitalized and receive medical care, seafarers ‘ lives are not threatened. After the incident concerning them criminal case on illegal crossing of the state border. Press Secretary of the President Dmitry Peskov has called the incident “a very dangerous provocation, which requires serious proceedings”.

Diplomatic relations between Ukraine and Russia was established in 1992 with the relevant Protocol. According to the legislation of Ukraine, proposals on the rupture of diplomatic relations entered the foreign Ministry or other Central bodies of Executive power (Cabinet of Ministers, ministries, agencies).

Earlier, the Ukrainian foreign Ministry said that it did not support the idea of a severance of diplomatic relations with Russia, as it believes that it may have a negative impact on the citizens of Ukraine.