Gave little rock: Boris Grebenschikov as a mirror of the world culture

The leader of the “Aquarium” taught rock-n-roll to speak Russian. 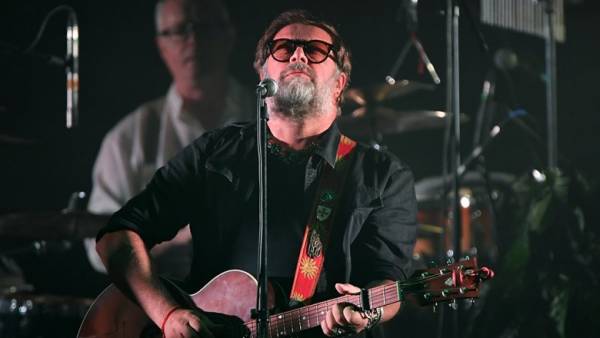 It without any (well, almost) ironically called a guru, a prophet, the founding father of Russian rock; moreover, as was said 30 years ago in the film “AssA”, he is “God, Shine comes from him”. He gets away with anything from praise of the incumbent (an unthinkable crime by the standards of the liberal party) to the concerts in Ukraine (not the best place from the point of view of the ultra-patriots). Listen to him, listen to him and know all sorts of people — from Brian Eno with David Byrne from the inhabitants of the corridors of the Russian government.

Every album under his own name or under the firm of his legendary band becomes an event. And today, on November 27, he will be 65.

On the occasion of the birth of Boris Grebenshchikov “Izvestia” talked about its importance to our culture — and not just rock-and-roll.

The phrase “BG translated the rock-n-roll in Russian language”, coined by someone of the critics, was, it seems, common place. Observation, however, is not quite accurate: transfers — speaking literary language, interlinear, — is engaged to the output Grebenshchikova on the big stage (“big” in the sense of cultural significance for that and subsequent time — even if in reality it was a flat cold sweat and the St. Petersburg provincial DC). Grebenshchikov has done something more important: replaced the crib and felt fine translation, integrating often alien and difficult meanings into the fabric of Russian culture — just as Druzes, Pasternak, Marshak, and Zakhoder was able to transplant to our soil the great English literature, from Shakespeare to Milne.

For many years a favorite pastime of detractors and admirers of BG — to seek out his texts borrowing: here Dylan, and there is Bowie, but here is Patti Smith (Apollinaire notice a few, what is the evidence, of course, about the level of criticism).

According to detractors, it is evidence of unoriginality; for fans is a sign of the highest talent and matchless erudition.

Wrong, most likely, both. Yes, the whole Russian rock secondary definition, “a pale, thin, Europay passer”, to borrow this for another reason, the definition of Yuri Shevchuk.

But as the Northern capital, conceived as a copy of the elusive Western originals, very quickly outgrew his secondary and was a unique cultural phenomenon, and Patriotic rock music and he BG in the first place has left behind an era when the expression had to do tracings of a foreign language and foreign music. Akvarium and BG in the series rockers of the 1980s stood still, rather the ability to quote and give allusions, rather than directly “preperati with England” (here we can recall and “shadow Theatre” “Alice”, resulting from Kyoto Song the Cure, and look on the screen kormil’tsev, the plot and textually — the translation of the song Robert De Niro Waiting Bananarama trio).

A lot of knowledge

And really, BG is a scholar, an intellectual who grew up in the cultural capital boy from educated family.

I think he’s one of the few (if not only) Russian rockers whose lyrics can make out of very serious philological articles.

But he never tried to “education and performance”: all of these quotes and allusions appear in his poems (texts and Grebenshikov is, of course, poems) natural and relaxed as an afternoon Faun (another favorite of BG image — again, borrowed). BG himself, however, never hid and did not hesitate: in 1980, known for samizdat letter Artemy Troitsky he listed in detail all the influenced the Aquarium and personally. “The Ambassador of rock-n-roll unevenly in the country,” he represented another naive culture of the aborigines, gradually, with shiny bling and beads giving them divine wisdom.

Without irony and exaggeration — a number of biblical quotations and allusions in the songs of HD is comparable to an array of citation in them Buddhist texts.

An unexpected way ironic commentator on the sidelines of world culture turned almost educator, gradually acquainting his — not always-so-sophisticated listeners with what is habitually referred to as boring stamp “treasures of world culture”. Listeners do not remain in debt to the very time when young BG, pack “your machine with an unknown number of strings”, caught a taxi to drive through a Blizzard Leningrad for another apartment, where they waited for the meeting with his songs (and with him). Always a full house and the response is immediate evidence of this: when Grebenshchikov three years ago announced the fundraiser to record a new album (already released in 2018, “Time N”), it is expected that the required 3 million rubles “drip” for 110 days. In reality, the process of crowdfunding took a little more than a day.

“Aquarium” has never tried to fit in with the surrounding reality — “sitting on a beautiful hill”, BG remained outside the official Soviet culture; he remains aloof from the present demarcation lines, not adjacent to the camps. To his credit, Boris Borisovich, he never shared terrible memories about the persecution by the KGB (unlike some of his friends and colleagues, undergone, according to them, in Soviet times, even in official status of “Mosconcert”). Playing in a teenage shocking, so shocking the Komsomol ideologists during included in the mythology of Russian rock band performances at the festival “Spring rhythms” in Tbilisi (1980), BG suddenly almost simultaneously turned into the domestic symbiosis of Dylan, Bowie and Jerry Garcia — Bohemian handsome, wise beyond his years and already have the understanding of almost everything. Approximately so it appears already in “Ivanov”, short film 1981 — by the way, quite legally taken the educational work of students of VGIK Alexander Ilikovskogo and Alexander Nekhoroshev.

And, of course, no “anti-Soviet” creation of BG has never been.

Few remember, but the song “Aquarium” for the first time came to the audience from the screen before any restructuring and to breakthrough “assy” — “Knocking on the doors of grass” plays in the radio of the heroine of “Beloved, dear, beloved and only” (1984) Dinara Assanova, and perhaps the most famous song by Grebenshikov (ironically, not written by him) sounds behind the scenes in a very strange context of the film about the everyday life of the Soviet police — “Strangers here do not go” (1985). For all that (and record on the “Melody” in 1987 with the annotation of Andrei Voznesensky).

“Aquarium” was perceived as almost a real “signature” rock with a Western accent — and, more importantly, perceived as such, and on the other side rodivshegosya the iron curtain.Almost alien

Compared to BG and the team here could do that “Sounds of Mu”, absolutely fascinated by Brian Eno, who had already by that time to meet Grebenshikov. Thanks to relations with top Western musicians — including David Bowie who sent the BG as a gift an expensive guitar, and David Stewart of the Eurythmics. Stewart, by the way, produced solo album, BG Radio Silence, released, unlike many other candidates of recognition abroad, the firm CBS, not small indie label. The particular album was not a success, but Grebenshchikov has since joined the professional ranks of the world’s rock elite in the sense that you know him (personally, not hearsay), almost everyone who means something in the world of rock. That’s why he didn’t just goes to enroll in London — playing to legendary musicians, the members of such compositions like King Crimson and Fairport Convention.

However, Grebenshchikov has always remained loyal to the Russian culture — “to stand, I hold the roots,” as he sang in one of his early songs.The news

Boris Grebenshchikov played “Aquarium” in one of the squares of Krasnodar

With the “Russian album” (1992) BG started, perhaps the most successful musical experiment is transplanted on domestic soil by rock-n-roll, he managed to instill a frail sapling sturdy branches of the Russian tradition, sending Nikita of Ryazan in the long and glorious path through the Sands of Petersburg in the distant Hyperborea, “back to Arkhangelsk”. In this iteration, is an inseparable bunch of BG / Aquarium (although the Aquarium is the brainchild of BG, and connected energy system), but not his solo. Concerts in the BG creates certain vibrations that he “kind of feeds itself and feeds the listener”, as explained the hero of the day back in 1980. And, astonishingly, it is BG better and clearer all responded to the “current agenda” — from the events of 1993 to the current state of Affairs. “A unit of measurement of seismic activity,” aptly called the “Aquarium,” a well-known critic Andrei Bukharin. BG continues to compile and comment on, connecting with the eternal topic of the day, the romance with the protest, and the funny with the tragic.

Unchanged it remains, perhaps, only love.

For all the work BG assures that the Apostolic words, “now these three remain: faith, hope, love; but the greatest of these is love” (1 cor. 13:13) mean it even more than all borrowed from the twentieth century. “We took away time and space” — complained once Anna Akhmatova. BG was one of those we took them back.