The restoration of the “Admiral Kuznetsov” will cost 70 million rubles

MOSCOW, November 22. /TASS/. The aircraft carrier “Admiral Kuznetsov” in the event of an accident with a floating dock 30 Oct received 52 damage, the cost of their removal will be about 70 million rubles. On Thursday TASS reported the head of the United shipbuilding Corporation (USC) Alexey Rakhmanov. 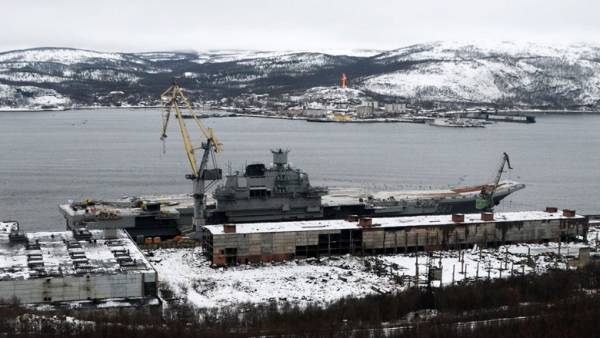 “The Commission [established for damage assessment] counted 52 damage. Total restoration of the ship will cost about 70 million rubles, that is within the budget of the modernization of “Admiral Kuznetsov” is belongs to the category of minor damage,” — said Rakhmanov, responding to a question.

What happens at the plant, which has damaged the “Admiral Kuznetsov”

He also said that “nothing serious that could lead to increase in terms of repair or beyond repair, we have not found”. “The completion of the repair is planned for the end of 2020 and the beginning of the trials, respectively, by 2021. To transfer the vehicle fleet is scheduled for mid-2021,” said USC head.

The only aircraft carrier of the Russian Navy “Admiral Kuznetsov” was damaged on 30 October, the descent into the water due to the fact that it sank floating dock PD-50. In particular, on the deck of the aircraft carrier fell mounted on the wall of the dock crane. Now the ship is at the 35th ship repair plant.

See also: Ministry of industry and trade told about the damage on the “Admiral Kuznetsov”