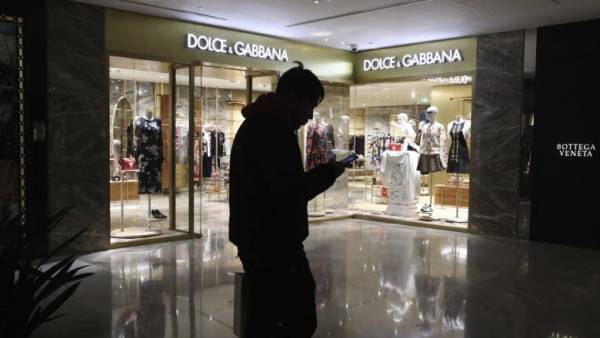 A day earlier, Dolce&Gabbana has been in the center of a scandal in China because of the commercials a fashion show in Shanghai and reviews claiming to be from one of the founders of the brand. The company was accused of racism and sexism, and the show had to be cancelled. The scandal erupted when the official accounts of the brand in social networks was published video that the Chinese model eating with chopsticks Italian dishes — pizza, pasta and cannoli, while the male voice gives her advice on how to cope better with a challenge, “playing on double meanings.”

This question in nature is not diplomatic, and we hope it does not turn into diplomatic.The leg Sweepingly the representative of the Chinese foreign Ministry

The official representative of the foreign Ministry of China has advised to address this question not to the Minister and to ordinary citizens.

#DGlovesChina ? More like #DGdesperateforthatChineseRMB lol. In a bid to further appeal to luxury”s covetable Chinese consumers, @dolcegabbana released some hella offensive “instructional” videos on the usage of chopsticks. Pandering at it’s finest, but taken up a notch by painting their target demographic as a tired and false stereotype of a people lacking refinement/culture to understand how to eat foreign foods and an over-the-top embellishment cliché of ambient music, comical pronunciations of foreign names/words, and Chinese subtitles (English added by us), which begs the question—who is this video actually for? It attempts to target China, but instead mocks them with a parodied vision of what modern China is not…a gag for amusement. Dolce & Gabbana have already removed the videos from their Chinese social media channels, but not Instagram. Stefano Gabbana has been on a much-needed social media cleanse (up until November 2nd), so maybe he kept himself busy by meddling with the marketing department for this series. Who wants to bet the XL cannoli “size” innuendos were his idea? Lmao. • #dolceandgabbana #altamoda #rtw #dgmillennials #stefanogabbana #shanghai #chinese #italian #cannoli #meme #wtf #dumb #lame #chopsticks #foodie #tutorial #cuisine #italianfood #asianmodel #asian #chinesefood #dietprada

Amid ongoing scandal, China’s largest online trading platform has removed from sale the products of Dolce&Gabbana. At the moment, search for the name of the brand on platforms Taobao, Tmall and JD displays a message “nothing found”.

To break off relations announced a number of famous Chinese figures of show business, which found racist video posted by the brand.

Among them the Ambassador of Dolce&Gabbana in China, the famous singer and actor van Tsunki. Many Chinese celebrities and modeling agencies that were supposed to participate in the Grand show in Shanghai on 21 November, refused it.

After the clips the situation was aggravated comments to the video in the network Instagram with the insults to China and Chinese on behalf of co-founder Stefano Gabbana. Later brand announced that the account Gabbana was hacked and apologized for publication and announced the investigation.