Seniors are encouraged to remain with the police

The Ministry of interior to increase the age limit for their employees for five years. 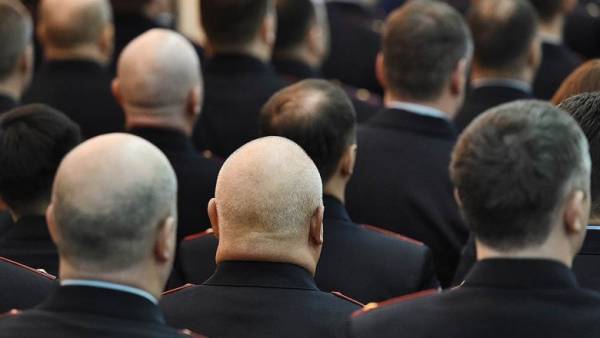 The higher ranks of the interior Ministry will be able to work at their posts longer by at least five years. The interior Ministry has developed a bill that increases the upper limit of retirement for its employees. The Agency’s initiative may be the beginning of pension reform in law enforcement agencies under the scheme of the civil service, but while we are talking only about senior officers — and not talking about the key system gaspensis the interior Ministry the number of years of service.

The interior Ministry has proposed to increase the age limit of service for senior officers. The Agency has published the bill on the portal regulation.gov.ru.

Thus, the interior Ministry proposes to increase the age limit of stay on service for majors and Lieutenant colonels from 50 to 55 years for colonels — up to 60 years and for all the generals to 65 years. In addition, the bill authorizes for five years after reaching the age limit to enter into with employees with positive recent certification of new contracts not just for one year but for a longer period of five years. As follows from the explanatory note to the document, the growth of the age limit associated with the need to ensure manning posts in the interior Ministry and to retain human resources Department. Now regular number of the Ministry of interior is not enough, about 6% of employees (about 48 thousand people).

The authors of the bill explain separately that their initiative has nothing to do with the years of service for pension benefits.

(law on state pensions of the interior Ministry superannuation gives a 20-year experience). However, as an example, they cite the increased upper limit of the period of service of officials from 60 to 65 years, which occurred in 2016 and is the first step to reforming the retirement age for most Russians. Recall from 1 January 2019 the retirement age in Russia will grow for five years — from 55 to 60 for women and from 60 to 65 years for men.

FIU explained whether pensioners to retire until 2019

Employees of other law enforcement agencies, as well as a number of other categories that do not fall under the scope of this reform. The decision was logical from the point of view of fiscal policy — one of the reasons for raising the retirement age was increasing transfers from the Federal budget to the budget of the Pension Fund required to maintain the previous amount of pensions by increasing the number of retirees. Pensions of the security forces, by contrast, are financed from the budget of the Pension Fund of payments, the majority of the workforce, and from the own budget of the Ministry of interior. However, the failure of the government to raise the retirement age of this category together with the other out of solidarity has been criticized by both experts and representatives of business and labor.

However, as the study performed by experts of the Institute for social policy Norway, comparing the data on 134 countries, in States with more stringent political regimes of the pension system in most cases is not universal and have a group of privileged pension beneficiaries. It can be assumed that the current position of the retiring employees of the interior Ministry is the norm, but in the case of increasing the retirement age for them will be the exception to the rule.