Mediator Syria was accused of fraud

Lieutenant-General of the Ministry of defense brought “dead souls”. 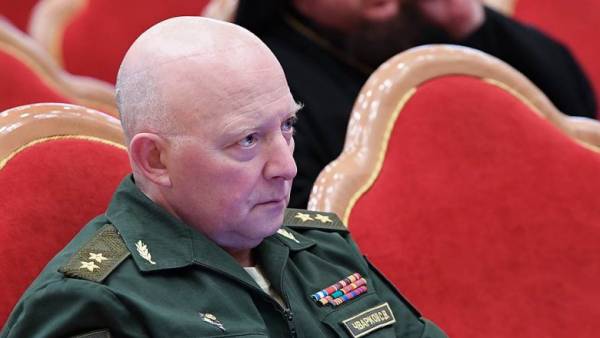 As it became known “” the figurant of criminal case about fraud was the former head of the Russian Center for reconciliation of the warring parties in Syria Sergey Charkov. Lieutenant-General, who now serves as the Deputy chief of Military Academy of the General staff, is accused in three years stole 6 million rubles in the implementation of a 400-million state contract with a commercial firm. Protection of Mr. Charkova claims that their client is alleged to act innocent, and consequently no direct evidence of his participation in the theft is not submitted.

A criminal case under part 4 St. 159 criminal code (fraud in especially large size) was brought to the military investigative Department of the TFR in Moscow in April 2018, against unidentified persons. the First and so far the only defendant in a 57-year-old Deputy head of the Military Academy of the General staff Sergei Charkov has become recently. Before he passed on business as the witness. The other day he was summoned for another interrogation, after which the General was charged. At the end of the investigative actions of Mr Charkova sent home and ordered to appear in court for election of a relatively new measure of restraint in the form of prohibition of certain actions (article 105.1 of the RF criminal code). In fact, the General was under house arrest, under which he was allowed to walk for three hours in the morning and evening.

The plot of this criminal case, according to “Kommersant”, went to prisoner three years ago, the contract between the Military Academy of the General staff and JSC “NPO Rusbiotech” on 400 million roubles. News

How to live on bribes in Russia

Note that in addition to this agreement from 2015 to 2018 NGOs signed 17 contracts by 331.7 million rubles On the company’s website States that it is engaged in the production and implementation of information and automated systems, development and creation of information security tools and means of telecommunication, and so on. Its clients include the Russian customs Academy, PKU “United strategic command of the southern military district”, Ministry of defense, Regardie and so on. However, no information about the relationship between Rusbiotech with the Military Academy of the General staff not in the public domain. Familiar with the situation source “b” noted that the speech in this case goes about closed the contract for the provision of military organization special technical services.

Investigators believed, General Charkov in the framework of the agreement with businessmen developed the scheme of plunder of money. As follows from the materials of the case, allegedly on his orders, from the Academy of the General staff in NGOs were seconded to participate in the implementation of the contract a number of civilians, who for three years Rusbiotech paid about 6 million roubles in the form of wages. However the consequence considers that actually sent these was the so-called dead souls, and all their money has got to Sergey Charkova.

According to “Kommersant”, the consequence has indications of several witnesses who stated that gave the General the envelope of “feels was money.” This information “Kommersant” confirmed the lawyer of the defendant Pavel Lapshov.

“Apart from very vague testimony of several witnesses, no direct evidence linking my client to the alleged act of the investigation is not presented. General Charkow was truly responsible from the Academy for interaction on government contracts with commercial entities, but to their financial component nothing had before,” said Mr. Lapshov.

Colleagues of Sergey Charkova as from the General staff of the armed forces and the defense Ministry say about it, mostly positive, using the term “intellectual”, “Professor” and “strategist”.

Despite the purely Cabinet positions (in 2011-2013, he headed the main Directorate for work with personnel, and in 2013 and to date is the Deputy head of the Military Academy of the General staff of the armed forces of the Russian Federation on educational work), he was in good standing with the leadership of the military. It Charkov from may to October 2016 was the head of the coordination centre for reconciliation the warring parties in Syria, ensuring the passage of humanitarian convoys and engaging in negotiations with the “Patriotic opposition”, which often was able to lure to the side of the government troops to fight radical Islamists. For participation in the Syrian campaign, the General was awarded the order “For military merits” and also received the departmental medal.

During the service, which, by the way, Sergey Charkov began in 1978, he received four state awards and departmental 35.News

the Deputy head of the Federal penitentiary service of Russia: it is necessary to open more colonies for prisoners of security forces

Unlike most of his colleagues were not shy of public speaking. After returning from Syrian missions (for it is he, note, and received the title of Lieutenant-General) sir Charkov often spoke at events and forums, where he loved to speculate on a variety of topics. For example, the fact that now is “a coordinated policy of discrediting Russia as the successor of the USSR with the aim of reducing the values of the country in the system of international relations.” Or, as he noted in one of his speeches, “the struggle with the falsification of history — it’s not only state and military management, but also the task of all our people.” However, some statements of his work was not limited: in June of this year he headed the jury of the ideas competition for the protection of hypersonic missiles, robots and “prompt global strike”, which the Ministry of defence carries out together with the Foundation for advanced studies. In JSC “NPO Rusbiotech” to comment on the situation did not.

It should be noted that recently senior staff of the Military Academy of the General staff is not the first time become involved in criminal cases. In 2016, for receiving bribes to 600 thousand rubles was arrested the former Deputy chief of logistics chief of the military University of the country Andrey Mityushkin and its subordinate Sergey Tarasov. These illegal fees, according to investigators, they received from one of the top managers of Smolensk, OOO “PC “Techno”” for victory in the tender for the supply of furniture for classrooms of the military Academy. Mr. Tarasov, the verdict of the Moscow garrison military court has sentenced to five years imprisonment and a fine of 2 million roubles Hearing Mr. Mityushkina because of his illness has not yet been completed.