Biologists have found that at the end of the warm season field planting of cannabis can constitute an important resource for bees. At a time when the number of bees in many regions is reduced, the commercial cultivation of this plant can help to rectify the situation. On the results the authors reported at the conference of Entomology 2018. 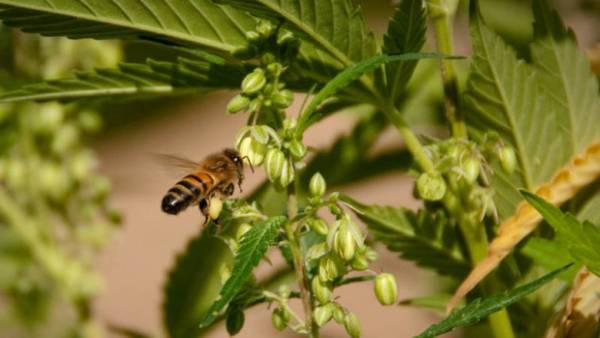 Because of the adopted in the twentieth century laws in most countries to cultivate any cannabis prohibited. However, in some US States legalized marijuana Smoking, and after that the country began to appear fields sown with hemp. They grow as the subspecies of the plant which contains high concentrations of psychoactive substances, and other subspecies. This is called hemp seed were used in the past in many countries, including Russia, for the production of vegetable fiber used to make rope and fabric. All members of the species are pollinated by the wind, that is, for reproduction they do not need insects.

Despite the fact that neither sowing hemp or other types of not secrete nectar, biologists have noticed on these fields, many species of bees. Within a month of study by American entomologists from the University of Colorado, representatives of 23 of the 66 living in the Colorado genera of bees were caught in traps on two fields with hemp.

The authors first evaluated the nutritional value of hemp pollen, which bees feed their larvae. During studies in August 2016 in the study area were not enough other blooming plants. According to scientists, this may explain the interest of bees to cannabis. Biologists note that this should be considered when developing strategies for pest management of cannabis. Now, however, scientists have not come to a consensus even on the question which species considered pests of this plant.