Feeder for Bigfoot built near Chelyabinsk

CHELYABINSK, 20 Nov — RIA Novosti. Feeder for Bigfoot (Yeti) was built on the river Bank in Nyazepetrovsky district of Chelyabinsk region. It is expected that this facility will attract tourists to the region, said the center for development of tourism in the region. 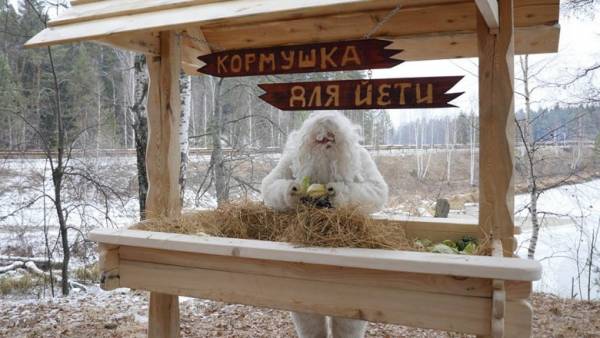 “In Nyazepetrovska area on the banks of the river Makasar opened a feeder for the Yeti. According to the organizers, the area is famous for its beautiful forests and a great diversity of fauna, so if somewhere lives a Yeti, it certainly is here. Note that this is the only feeder for Bigfoot not only in Russia but in the world”, — stated in the message.

Published the results of DNA analysis of Bigfoot

The idea to make a feeder for Bigfoot originated from the employees of the district house of culture in 2010, but its realization came only now, the report States.

The art object is no coincidence appeared on the banks of the river Kalazar, in the summer a lot of tourists here from other municipalities, including from the Sverdlovsk region. They can take a picture near the trough, thus, making this place popular with tourists, explained in a statement.

As noted by the tourism development centre, to a snow man was kind, should be left in the trough fruits, vegetables, seeds, even if the Yeti no, it would eat forest dwellers.