Moths drink the tears of a bird 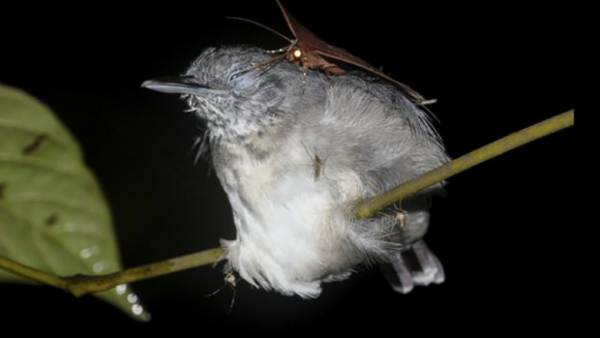 Brazilian biologist witnessed a rare behaviour of tropical butterflies Gorgone macarea, says the article, published in Ecology. These nocturnal insects fed on the tears of birds down their necks, plunged its proboscis into his eyes and drank from it.

Seal made friends with a butterfly at the zoo USA (video)

Some Lepidoptera (Lepidóptera) are luciferama, that is, they feed on the lacrimal fluid of large vertebrates. So insects get water, protein and salt sodium is essential for the normal functioning of the body. The vast majority of Lakeview feeds on the tears of mammals and reptiles — turtles and crocodiles, and the tear fluid is one of their food sources. Only two scientists have recorded cases where Lepidoptera fed on the tears of birds. It was a moth from the family arabid — Hemiceratoides hieroglyphica of Madagascar and living in the tropics of South America, the moth Azeta melanea.

In a new article by Brazilian biologist Leandro de Lima Moraes (Leandro Moraes de Lima) for the third time described similar to the behavior that he observed in the Central Amazon river, Solimoens. It took place in the night.

The female is brown of Muravlenko Hypocnemoides melanopogon was resting on a tree branch, and she sat on the neck, butterfly Gorgone macarea of the family Arabic. Periodically, she ran the proboscis bird in the eye, and, apparently, saw out the liquid.

That same night, the researcher noticed another Muravlenko sitting on a tree in the eye which feed the butterfly G. macarea. Both birds did not seem disturbed by the behavior of insects, and they remained in the stillness all the while the scientist was watching them. It is known that at night the metabolism slows down some birds, their temperature decreases and they fall into a stupor. Perhaps that is why both Muravlenko did not respond to the butterflies that drank their tears.