Until the next election can be fired up to 10 heads of regions. 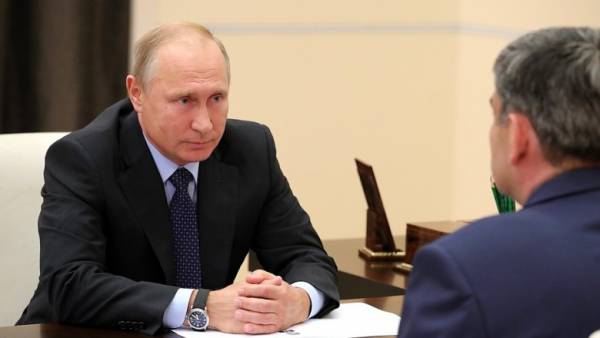 President Vladimir Putin invited the Governor of the Sakhalin region Oleg Kozhemyako to lead Primorsky Krai is not able to win gubernatorial elections, acting Governor Andrei Tarasenko (the results of the elections after the second round was declared invalid because of massive violations).

Kozhemyako asked about the appointment in Primorye, he said to Vedomosti. According to a transcript on the Kremlin website Kozhemyako reminded Putin that he was born and raised in Primorye, began to work there, “looked at the situation [with the elections] that there arose, it was very good” (however, the President said: “the Normal situation”). So Kozhemyako, asked the President for permission to participate in the election of the Governor of the province.

Kozhemyako is the first Governor who is headed for a fourth region in 2005-2007 he headed the Koryak, in 2008-2015 the Amur region and on Sakhalin moved in September 2015 following the resignation arrested on charges of corruption of the Governor Alexander Horoshavin.

In Primorye needed or the acting Governor, or someone of a Federal Deputy Minister, says a person close to the presidential administration: “we selected Kozhemyako. Although it is for Primorye local figure, but the conflict”. The main role is played by the fact that he’s a local (Kozhemyako was born in Primorye and-Koryak worked and did business in his native land) and also a good Manager is first and foremost a crisis, said the source: “in addition, it is independent of the other elites. It can be called a Governor-heavyweight”.

Tarasenko last few days was in Moscow, where he met with employees of the presidential administration and presidential aide Igor Levitin, knows people close to the leadership of the Primorsky region is not excluded, the appointment of the former acting Governor to the post of Deputy Minister of transport.

Until the early 2000s Kozhemyako was engaged in business, his main brainchild was Preobrazhenskaya base of trawling fleet (PBTF) is according to own data, the largest fishing enterprise in the Far East. After Kozhemyako went into politics, the business was continued by his relatives. In July 2018 PBTF reported on the change of owners: 96,4% of the company acquired ZAO “Sakhalin Island” associated with the ex-Senator from Sakhalin region Alexander Verhovsky. The transaction amount — more than $400 million, according to sources “Vedomosti”.

After the deal with relatives Kozhemyako left the fishing business — they still belong to production and processing facilities, the group Salmonica (mainly on Kamchatka and Sakhalin). They have a production quota of Alaska Pollock, herring, crab and other seafood. Forbes estimated the group’s revenue Salmonica in 2016 at about $150 million.

In 2017 at the auction of the Agency company, the owner of which was the son of the Governor of Sakhalin Nikita Kozhemyako won the auction for the extraction of crab in the Maritime subzone. Earlier, the Governor said that his son Nikita deploys the business in Primorsky Krai. In particular, his company plans to build a large greenhouse complex of 30 hectares, reported Kozhemyako, Jr., “Vedomosti”.

Replacement in the South

Tarasenko became the third delayed on Wednesday by the Governor: shortly before the Kremlin announced the dismissal of heads of the Astrakhan region and Kabardino-Balkaria (KBR), Alexander Zhilkin, and Yuri Kokov.

The kochs asked “on a number of circumstances, including family matters”, translate it to Moscow, said Putin during a meeting with his successor and namesake of Kazbek by Kochavim. The new acting head of the Republic about five years working in the regional unit of the Kremlin administration on domestic policy, which came from the post of Deputy of the Parliament of the CBD.