Ukraine will come with their autocephaly 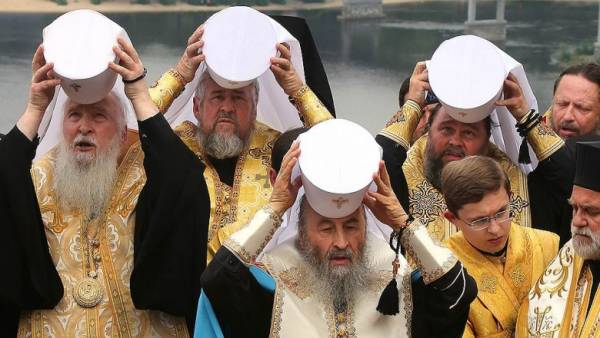 The Synod of the Ukrainian Orthodox Church (UOC) of the Moscow Patriarchate called on the Patriarch of Constantinople Bartholomew not to interfere in the internal Affairs of the Church, demanding that his Exarch left Ukraine. Meanwhile, the US state Department welcomed the granting of autocephaly of the Ukrainian Orthodox Church, without specifying which of the country’s existing three Orthodox churches have in mind. Interlocutor “b” in the Constantinople Patriarchate has made it clear that “the Ukrainian hierarchs should not think that the Tomos will be issued by one of the existing churches, it will be a new structure.” “Outstanding” remains the property issue: who owns the Kyiv-Pechersk, Pochayiv, Svyatogorsk monastery and other religious objects.

“The joint service with the Exarch of the Patriarchate of Constantinople in Ukraine will be stopped,” warned the Holy Synod of the UOC-MP. As stated in the UOC, “their purpose is a gross interference in the internal Affairs of the Ukrainian Orthodox Church and violation of its canonical territory.” The Synod believes that the messengers of the Pamphylian Constantinople, Archbishop Daniel and Bishop Ilarion of Edmonton are obliged “to leave the canonical territory of the UOC”, their “activities is anticanonically and violates inter-confessional peace in Ukraine.”

At the same time the Holy Synod of the UOC-MP called on the deputies of the Verkhovna Rada, “working on the implementation of laws No. 4128 (about changing the subordination of religious communities), no. 4511 (on the special status of religious organizations), No. 5309 (for change of name of religious organizations), to abandon those legislative intent as contradicting the Constitution of Ukraine and the anti-Catholic”. “These legislative initiatives are aimed at legal liquidation of the Ukrainian Orthodox Church by means of raider attacks through the name change, illegal interference in the control and seizure of property (shrines, temples and monasteries),” — said in the Synod. The intention of the Ukrainian authorities to obtain from Constantinople the Tomos of autocephaly of the Ukrainian Church called the “anti-Church initiatives”.

We will remind, Ukraine has three Orthodox churches. The UOC-MP headed by Metropolitan Onuphrius is the only one recognized in the Orthodox world Church in the country. UOC Kiev Patriarchate headed by Patriarch Filaret, a breakaway from the Russian Orthodox Church in 1992, in Moscow is called schismatic, and its Primate in 1997, the Russian Orthodox Church anathematized. The Ukrainian Autocephalous Church was created in 1917, it is the head of the Metropolitan Macarius.

In the UOC-Kyiv Patriarchate does not agree with the assessments of the Synod of the UOC-MP. According to the Archbishop of Chernihiv and Nizhyn of the UOC KP yevstratii (Zori), Ukraine has “no canonical territory of Moscow Patriarchate”, so “leave the Exarch of Constantinople, nothing.”

In support of the idea Thomas expressed the American administration. “The U.S. supports the granting of autocephaly of the Ukrainian Orthodox Church”, — said the press service of the U.S. Department of state. “The United States respects the ability of the Ukrainian Orthodox religious leaders and followers to implement autocephaly in accordance with their beliefs — says the official statement of the state Department.— We respect the Ecumenical Patriarch as the voice of religious tolerance and interfaith dialogue.”

“Now it was the turn of Ukraine to receive autocephaly. This happens, because it’s her right,” — said earlier the Ecumenical Patriarch Bartholomew. He noted that “the provision of a new Autocephalous status to the Orthodox churches, starting with the Russia of the XVI century, belongs exclusively to the Ecumenical Patriarchate”, causing the displeasure and censure by the Russian Orthodox Church.