The speaker urged MPs to abide by the dress code of the lower house of Parliament. 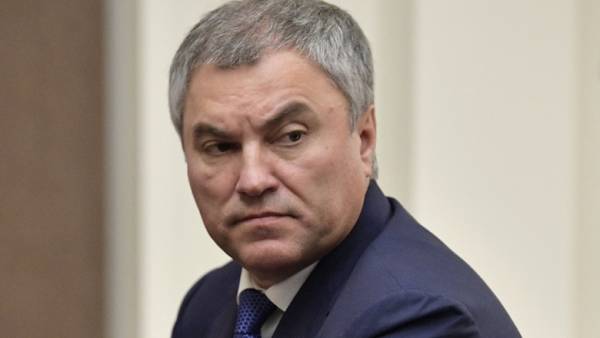 Speaker of the state Duma Vyacheslav Volodin chided deputies from the Communist party Valery Raskina and Denis Parfenov for the fact that they came to the plenary session of the lower house of Parliament, which is considered the second reading of the bill on pension reform, protest t-shirts. According to him, all members must abide by the regulations of the state Duma, including coming to meetings with appropriate clothing.

“Colleagues, I think that the salary of the Deputy possible to buy a jacket and tie, too,” — said the speaker.

The statement of the speaker became the Communist MPs Valery Rashkin and Denis Parfenov, who came to the plenary session in t-shirts depicting a crossed-out numbers 63/65, symbolizing the increase in the retirement age for Russians. They drew the attention of the Deputy from LDPR Sergey Ivanov, who said that the regulations of the state Duma applies to all without exception members.

On 24 September the state Duma Committee for labour and social policy recommended the adoption in second reading a bill to raise the retirement age taking into account the amendments made by the President and the deputies from “United Russia”. The Committee reviewed the 286 amendments and endorsed nine initiatives of Vladimir Putin.

On 29 August the President of Russia in a televised address made suggestions for adjusting the original bill. The main initiative of the head of state was to raise the retirement age for women not for eight years (to 63), and for five to 60 years. The proposed amendments were submitted to the Duma in early September.