The state Duma approved a pension reform in second reading

For the document voted 326 deputies, against — 59, one abstained. The third reading will take place on 27 September. 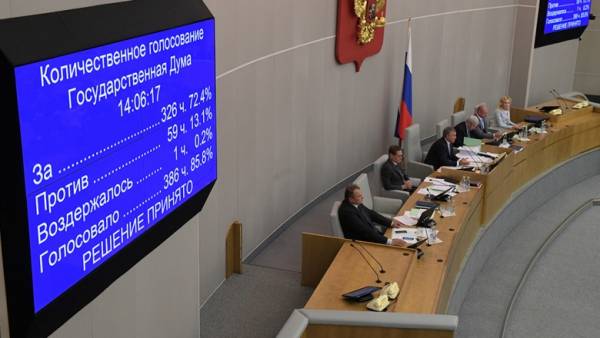 The lower house of Parliament has approved all amendments to the bill, which was introduced by the President of Russia Vladimir Putin and the faction “United Russia”. For the amendment of the President voted unanimously. During consideration of the bill outside the state Duma took action against raising the retirement age. It was conducted by the Communist party. In the plenary hall, a group of deputies from the Communist party, including Valery Rashkin, also staged: they came in t-shirts depicting a crossed-out numbers 63 and 65 (age of retirement in the original version of the bill).

Recall that in the first reading a bill on pension reform, the state Duma adopted on July 19. Initially it was assumed that the retirement age will be raised to 65 years for men and 63 years for women.

On 29 August President of Russia Vladimir Putin in a televised address, made proposals on mitigation of pension reform. In particular, it is suggested to raise the age of retirement for women to 63 years, and 60 years. The increase will begin on 1 January 2019 and will take place gradually. The President also offered to allow mothers of large families to early retirement, increase unemployment benefits for people close to retirement age and to introduce responsibility, including criminal, for dismissal before retirement. September 5, Vladimir Putin has made nine amendments to the second reading of the pension bill.