The author of the samizdat tried to figure out what is really going on in KHMAO and YANAO than live modern nomads and whether their relationship with oil and gas is invisible to the big cities war. 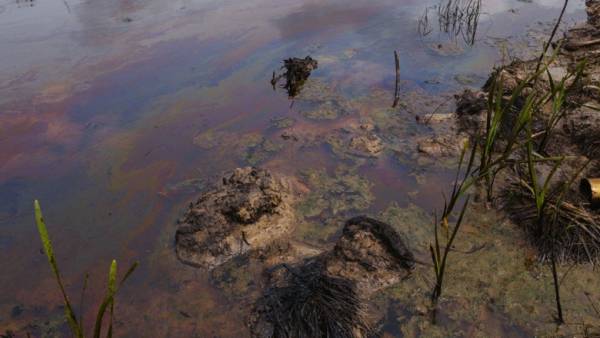 The total area of the main oil and gas pantry of Russia — Khanty-Mansi and Yamalo-Nenets Autonomous districts twice in France. Live in the area and wander a few indigenous peoples, most numerous of them — Nenets and Khanty, who gave half titles for both regions. They often have to deal with representatives of the oil and gas industry. Some breeders are trying to learn from this neighbourhood at least some benefit for themselves, but many fear that oil spills, rotting earth and unpunished poaching damage the ecology and threaten the disappearance of traditional culture of the indigenous peoples of the North.

DIESEL FUEL AND THE WORLD

In 2008, linguist and fellow of the Institute of linguistics Maria Amelina held in the Yamal village of Se-Yakha year: taught Russian and literature for children of the Nenets reindeer herders. Then Mary decided as a linguist closely to learn the language and customs of the Nenets tundra and went with them into the camp for six months. Since then, the problems and life of the largest of the small Nations of the Yamal Maria takes quite personally:

Tundra Nenets is very welcoming and friendly, they are easy to make contact, they are happy to talk about their culture. In the tundra very little happens, so each new person there is a special event.

It is interesting that in tundra Nenets Khanty language are called “Xabi”. This word roughly translates as “slave.” It is hardly necessary to take this literally, just the Nenets have always been more deer than hunt, and perhaps in the Nenets Khanty camps often were laborers. Khanty generally more closed, more difficult with them than with the Nenets. They have a different temperament.

According to Maria, not all oil companies are in conflict with the Nenets and Khanty: all depends on the area. For example, recently on the Yamal Peninsula gas companies sometimes consult with the reindeer herders, where it is better to lay the pipe, although this does not mean that all suggestions are considered indigenous. Reports of deliberate destruction of the sacred places of the Nenets on the Yamal Peninsula and the Taimyr Peninsula in the press almost there, and information about conflicts with oil and gas companies. Tuhansia Nenets, on the contrary, are glad that a number of them are miners of gas and oil, so they get free diesel and petrol. And the Yamal Nenets even in his own appreciate the old boreholes in the tundra it is a good reference.

“That’s what really bothers the reindeer herders on the Yamal Peninsula, is the largest building in the Arctic — Sabetta — sighs Maria. — There was made a great port for ships and the airport. Herders called and complained that the Sabetta launched icebreaker, setting in the North of the Ob and the arc following the route of the Northern sea route. Now in winter, there is open water, the humidity increased, began to form ice. The deer can’t break it with hooves to reach the lichen, were left without food and die. Herders say that the loss of a huge deer. In addition, this year the wild deer that are in the process of migration come to the Yamal Peninsula from the East are unable to go back — they are usually on the ice went through the Strait to the mainland, and this year was locked. Feed on wild and domestic on the Yamal Peninsula was not enough. Plus wild gone with a pet deer. To catch up and bring them back to the camp is very difficult.”

However, what is true for Yamal, do not have the same works in the case of the Khanty, where more oil is extracted and environmental risks is significantly higher.ROTTING LAND OF THE NOMAD

The most problematic regions of Nadym district and Novy Urengoy. There, on the one hand, more industrial development on the Yamal Peninsula, and on the other more and herders. One of the locals — a human rights activist, Chairman of the Board geographically neighboring community of indigenous minorities of the North “Nadym” Dmitry Lozanov. He is of mixed Khanty-Nenets family: his grandmother and forest Nenets native Numto.

According to the laws of the tundra

“Our government’s main task is the development of the Yamal Peninsula, in particular Sabetti, all set up for the implementation of this project, — says Dmitry, and pay no attention to the southern part of the region. All the administrative resources, regulatory authorities in Salekhard, and poor logistics, so as to Nadym from Salekhard only by plane to get to. But somehow, for us to fly the emergency service, sanitary aviation, the environmental Prosecutor’s office, electoral Commission, and employees of the Department on Affairs of indigenous peoples of Yamal — no. When we ask why, we say that flights are expensive and this expense, the authority is not provided”.

On the official website of the Department stated that one of the areas of activity — protection of original habitat and traditional lifestyle of herders. However, according to Dmitry, the staff of the Department are engaged only in words.

“In 2015 I collected a package of documents in order to run in the local Legislative Assembly from the party “Fair Russia”, — says Dmitry. — I wanted to achieve order, to enforce the law on the organization of local government in our district. I am very concerned about one question: why in the same region, KHMAO, he complied and indigenous peoples isolated territory of traditional nature use, and we do not? I do one day, officials said: “You don’t look at Federal laws, we’ve got their legislation, local. What is written by the feds — just a sample”. Well, I know that’s absurd. Here in 2015, killed 100 head of deer in Nadym, the litigation is still ongoing. Because there is formed the territory of traditional nature use in the Khanty-Mansiysk Autonomous district. People do not have documents on land ownership. And to prove that their deer had the right to graze where they were grazing, not easy”.

When bottled, the oil, the oil is sometimes poured oil sand and peat. So it creates the illusion of untouched nature. But in fact, says Dmitry, under the peat “ground rot”: the moss blackens and spoils.

“Of course, it all depends on the companies: some of them are still somehow take into account our interests, others will not, — says Dmitry. — Like, if you work here, you have to understand the customs and traditions of people who live here. But in reality they are the peoples of the North is not interesting. They aim to produce oil at any price. Some say: “it is easier to pay the fine and forget.” So when master another field, often leave behind a lot of garbage. Recently we were near a field and saw that the oil companies dumped chemicals near the river. And not far from her camp is.”

Herders often inform Dmitry about abandoned debris, and sometimes through the courts could ensure that the oil it a cleaned. But sometimes the same scrap metal found elsewhere. From-for bad ecology every year the area of territory of residence and nomadism is shrinking. A herd of deer in one place can not stay all the time have to move. In addition, in 2016 in the region started forest fires. The situation is so severe that the extinguishing of the year from the Federal budget was allocated 50 million rubles, and the Yamal Peninsula announced it is ready to spend another 280 million if necessary. After fires areas to pastures remained even less than before.

Until he came rigs, was the desire for a traditional way of life. Father taught me how to pin the harness, like a nomad needs to survive and behave. Today’s youth is different. Many do not know their native language. And not all schools are teaching it somewhere even no textbooks. Now many are lost and do not know where to go and what to do.Dmitry Lozanov

According to Dmitry, the problem is that the key gas and oil fields are being actively developed, and companies do not have even the formal social support to indigenous peoples in the Khanty-Mansiysk Autonomous district. Also in the area, no specific territories, where the Nenets and Khanty may roam. But if shifting nomadic route of one family, there is a Domino effect: the rest of the families also have to look for new routes, and not all are successful.

“There are, of course, and the problem of oil spills, — adds Dmytro. Some oil companies use the fact that the natives never go to the city to complain. He would rather gather his reindeer and move to another place. In the end, there are violations, but they are not recorded. After all, to establish the fact of violation, you need to take photos to capture a spill, call the visiting Commission. And she may not come.”

Can be, and it is good that the youth of today is not the same as I was. Some go to University and go into oil production, enter into mixed marriages. Of course, our guys in oil companies, mainly the workers, not leaders. But they have a purpose: to protect patrimonial places.CAT, SPILLS, POACHERS

The Chairman of the family community hunt “Limpas” Tevlina Antonina was born and raised in KHMAO. She now works as a janitor in a dormitory for workers “Surgutneftegaz”. At first I thought that it is temporary, and then used another place to look is not.

Between urban and nomadic

Family of Antonina still leads a traditional lifestyle: travel, engaged in reindeer breeding and lives in the camp. Tevlina the exception: of their friends and neighbors no longer keeps reindeer. It is not profitable.

“With the arrival of oil on the territory of traditional nature use of the indigenous population, of course, has changed, and not for the better, — says Antonina. — Now very few people engaged in reindeer breeding. For deer you need to constantly care for, train them, and poachers very much. It turns out that the amount of work you put in and then the poachers come, shoot your deer and taken away. Basically, do the employees of the local oil and gas companies, since they already know the area well. To catch poachers is very difficult because there is no evidence, although sometimes know exactly who fired at our deer”.