In Switzerland found a bronze hand by the age of 3.5 thousand years

In Switzerland, the oldest found in Europe a sculpture depicting part of the human body. As reported on the website of the Archaeological service of the Canton of Bern, it is hand made from bronze and gold, about 3.5 thousand years ago. 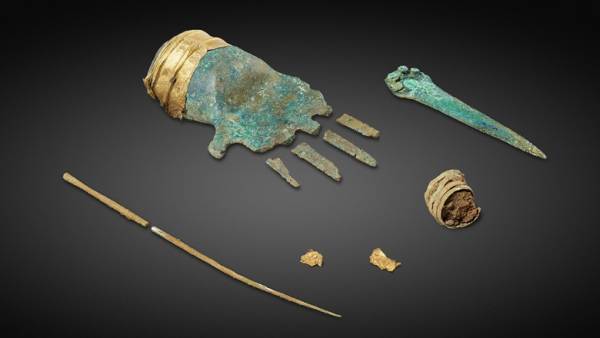 The artifact was discovered by archaeologists-lovers near lake Biel in the Western part of the country in the fall of 2017. They gave the Archaeological service of the bronze hand, and was found next to a bronze dagger and human edge. The hand was a bit smaller than a real human; it was made of bronze, with a “cuff” of gold, and weighed almost 400 grams. At the bottom of the arm was made of the hole, which, presumably, allowed to attach it to a stick or pole.

Latest gold Empire: in Italy, found the treasure in millions of euros

The researchers were able to date the hand on a small piece of resin in which the gold was attached to bronze. The artifact was made of 3.4−3.5 thousand years ago and is probably the oldest image of a portion of the human body in Europe. The Swiss archaeologists and their colleagues from Germany and France, nothing like they are still not found.

In the spring of 2018 archaeologists have resumed excavations at the site and found a burial with the remains of a middle-aged man, and in it a bronze pin for clothes and a bronze spiral, probably a hair pin. In addition, the tomb was found broken bronze finger coinciding with the fault at hand, and the remnants of gold “cuff”, which showed that the original artifact was buried. Under the tomb, researchers found an older stone building. Probably man specially buried over him, and perhaps it indicates his high social status.