Defeat in the second round hit the HR

“United Russia” makes the findings of the campaign. 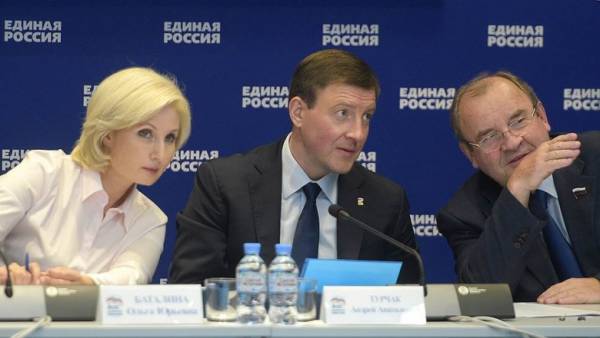 “United Russia” summed up the results of the elections. The Secretary of the General Council of the party Andrei Turchak called the campaign “successful”, although he said the “negative background information” in connection with pension reform. In regions where nominated the party candidates lost in the second round, will be made HR conclusions. The reasons for the defeat of candidates in the second round of Governor’s elections, the United Russia discussed behind closed doors with the first Deputy head of presidential administration (AP) Sergei Kiriyenko. According to sources, “Kommersant”, the meeting was told about the inadmissibility of the game in the giveaway with the opposition since Sergey Furgal in the Khabarovsk Krai has won elections of the Governor after he passed the “contract region on elections in the state Duma”.

The leadership of the party and the state Duma deputies from “United Russia”, worked on the second rounds of gubernatorial elections, the evening of 25 September, met with the first Deputy head of the presidential administration Sergei Kiriyenko. That he is going to visit the office of the party, “Kommersant” reported the day before. The communication lasted about two hours, and talked not only to Mr. Kirienko, but visited the territories of members. “Many rarely see it, so tried to speak a little bit,” says the attendee. Another United Russia believes that Sergey Kirienko “decided to say “thank you” Khural of forty deputies.”

“At the meeting said that the regional elections were normal — said “Kommersant” one of the participants of the meeting.— The reasons for the defeat of the governors is clear: fatigue from specific people, wrong refraction their negative sides, outstanding intra-elite conflict”.

23 Sep candidates of “United Russia” Svetlana Orlov and Vyacheslav Shport lost in the second round of elections in Vladimir oblast and Khabarovsk Krai. At the meeting it was noted that the pension reform is perceived as a “breach of contract”, but most of all it affected the acting head of Primorye Andrey Tarasenko, who had publicly supported the initiative (the results of the second round on 16 September declared invalid).