Orlovsky, the court ordered an inmate of IK-3 in the Kursk region to cover the cost of its maintenance in prison. 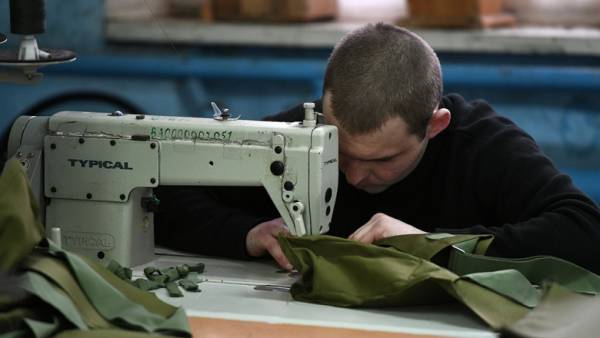 As explained in a correctional facility, the convicted person refused to work and therefore could not reimburse the cost of their food, clothing and utility bills from the wages. Now, according to the court, the man is obliged to compensate its contents for 10 years — about 120 thousand roubles. “Газета.Ru” found out what the work of Russian prisoners and why are their salaries not to be envied.

Factory regional court of the city of eagle has decided to collect from Kursk prisoner of a corrective colony № 3 (IR-3) the expenses, which the institution spent on its maintenance for 10 years. The reason for the proceedings was the refusal of the convict to work in the place of detention.

As it became known, citizen Rayev was sentenced to 10 years imprisonment and a fine of 30 thousand rubles, and then sent to serve his sentence in IK-3 UFSIN of Russia for Kursk region. Convict provide food, necessities and personal hygiene products.

During the period of detention Agency spends on a man about 1 thousand rubles a month, and for 10 years a total of nearly 119,5 thousand rubles, reported on the website of the Oryol court.

As explained in IR-3, Revu offered the job, but he flatly refused to work.

Work in the Russian colonies was not voluntary, although the Constitution prohibits forced labour. The convict is obliged to work for the works which he determines the administration of the correctional institution. The work place should be adjusted based on age, gender, disability and health. On the last item of labor may exempt pensioners, the disabled and pregnant women, as well as — temporarily — ill.

If the prisoner decides to get an education, he is also not going to work. Of those convicted, many for the penitentiary, in 2017 156 thousand prisoners have received working specialty, and 65 thousand in the zone graduated from high school.

Convict Rayev from the Kursk colonies such causes not to work was not, so the court ordered him to reimburse all expenses of the penitentiary for his food, clothing, housing and communal services and hygiene.

“The refusal of work or cessation of work is a malicious violation of the established order of serving of punishment, and can entail the application of disciplinary measures and material liability,” — said Orlovsky court.

The decision has not entered into force, so the heavens can still appeal the fine.

Despite the fact that, by law, to work in places of deprivation of liberty most of the prisoners, in reality the Russian colonies working less than half of the prisoners. So, last year the head of the Commission and head of the Association of trade unions of law enforcement bodies, Alexey Lobarev reported that, according to him, the labor of prisoners is used by only 30%. Often the reason for the low employment of prisoners is that the colony simply cannot give them jobs because they do not have the necessary production capacity.